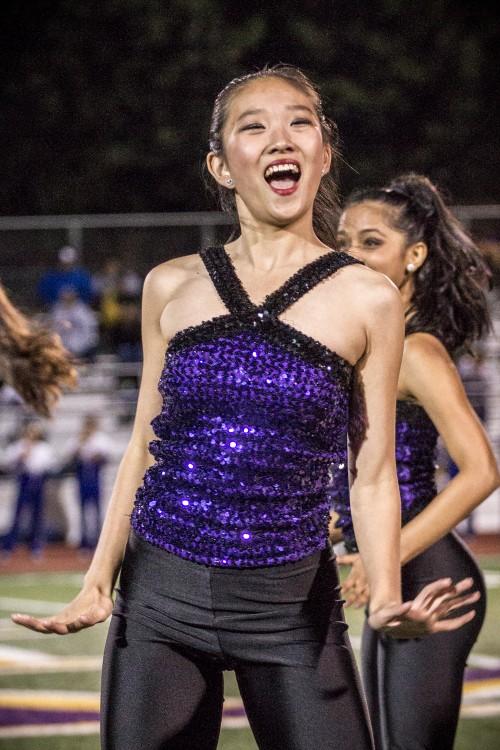 With a minute remaining in the second quarter, they line up in three neat files on the left end of the field, waiting eagerly. Moments after halftime is called, the Marquesas make their run for the 50-yard line as the announcer draws out his last syllable. The crowd erupts.

Nov. 7 marked the last halftime performance for the dance team. They spent much of the first semester working on football game routines — “Bom Bom” for the senior night game, the traditional “Hey Baby” for the Homecoming game, and “Move” for the first and third games. With games spread out fairly evenly throughout the semester, the Marquesas have had time in between performances to work on technique. The halftime performances themselves, according to coach Hilary Maxwell, are quite exciting.

“The girls love performing at football games,” Maxwell said. “It’s always fun to have the crowd cheering them on.”

But as the Marquesas transition into the competition season, a stark change is to be expected as they now begin focusing on preparing not for a crowd of students but rather a panel of judges. With a collection of categories to prepare for — medium, kick, and character to name a few — dance team member sophomore Grace Nevitt expects a full focus on competitions. In fact, the morning after their last performance, the Marquesas had already begun working on a routine with a choreographer whom Maxwell hired. And junior Naomi Wang, a member of the team since her freshman year, is looking for an even higher work ethic from fellow teammates.

“Football performances are more for entertainment,” Wang said. “We only spend a week or two on football routines, but for competitions we spend months — we take it much more seriously.”

The Marquesas’ first competition will be held on Jan. 31 at Homestead High School.