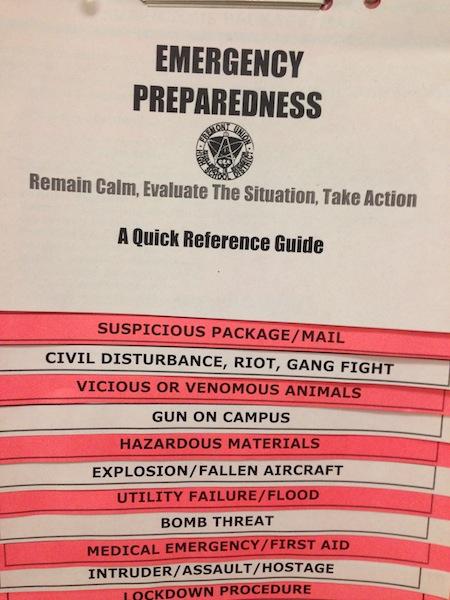 There is a packet of emergency preparation guidelines in each classroom. Although measures like these are common in schools, some students believe that more precautions should be taken to increase safety. Photo by Varsha Venkat.

he last time MVHS experienced an on-campus earthquake was in 1989. Most of the teachers and staff members who

experienced the tremor have left the school, taking with them the memories of that disaster.

The Loma Prieta was nearly a quarter of a century ago. Since then, with more and more pressure building in nearby faults, the chances of the next major earthquake striking within the next decade have risen dramatically. In 2008, the U.S. Geological Survey estimated that there is a 99.7 percent chance of a 6.7 magnitude or greater earthquake hitting California by 2038 — with a 63 percent chance it will happen in the Bay Area.

The Bay Area earthquake ensued in many calls for improved early-warning systems and revived safety concerns in preparation for the next 7.0 earthquake. For this reason, MVHS has strived to make its campus resilient to natural disasters.

“I know that codes for public buildings, like schools for example, are the highest of the highest in terms of strictness with regards to earthquakes,” Vice Principal Michael Hicks said. “These buildings are occupied not just by a lot of people but by a lot of young children, so safety is extremely important.”

Most recently, all of the latest designs and materials were used in the structure of the newly constructed E building. Every year, the state sets new standards related to what framework and composition must be used in order to make a building safer and more stable.
“The codes are so strict and followed with the modernizations of buildings,” Hicks said. “If an earthquake were to strike, I’d rather be here at school than at home.”
The E Building is not the only structure on campus built with disaster-resilience techniques. Most of the buildings in MVHS have limited items overhead in the ceilings, in case roofs cave in during a quake.

“We always have drills for the ‘duck and cover’,” Hicks said. “Some of the desks in classrooms are smaller, so if you can cover up during an earthquake, great. It’s really about getting to somewhere safe after that initial shake and being smart about what you’re walking past.”

But these drills and building precautions may not be enough to ensure safety for the MVHS community.

According to senior Monica Wang, president of the MVHS Red Cross club, while the school’s earthquake drills are useful for teaching students

how to protect themselves at school, these drills should also show students how to react in the event of an off-campus emergency. She notes that the school is responsible for teaching students how to survive such disasters outside of school, and as a result it should address most, if not all, aspects of disaster prep. Wang says that simply knowing the “duck and cover” drill traditionally taught at schools is insufficient.

“I think we would have been prepared if it was at school, but there are definitely some things that have changed since elementary school,” Wang said. “They used to tell us you can stand under doorways, but construction has been changing recently, [and] they build things a lot faster, so you don’t want to stand under the doorways any more.”

Moreover, Wang says that most people are not aware of the proper earthquake protocol; she notes that people only know to hide under a table, but do not know what to do when there are rooms in their house without any such coverings.

“[The disaster simulation Red Cross held this year] was basically to let the [members] see that you don’t know where you’ll be when [an earthquake] happens,” Wang said, “even if it’s in your own house.”

Facilities manager Chris Kenney concurs with Wang’s statement. He says that while the school is doing what it can to prepare, there can definitely be more training to prepare students and faculty for the next disaster. And in the wake of the Napa earthquake, learning about safety precautions and partaking in drills seems paramount to preparing students for future natural disasters.