La Pluma Coffeehouse allows students to kick back and relax 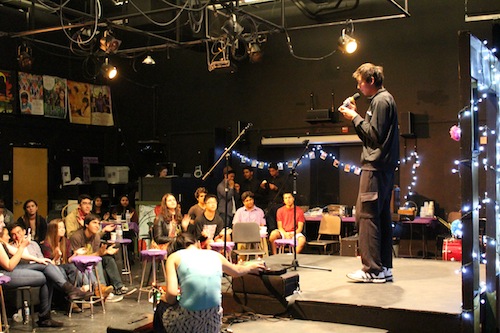 Sophomore Evan Zhang sings at the La Pluma Coffeehouse. The event featured a variety of acts including singing, dancing and role play. Photo by Varsha Venkat.

How often do you get to hear a musician with a Spanish guitar at school, poetry readings and breakdancers perform on the same stage? La Pluma Coffeehouse had all that and more.

In an attempt to recreate coffee shop vibes at MVHS, the school’s literary publication La Pluma hosted its annual coffeehouse on March 28 from 6 to 10 p.m. The event’s main goal was to rally together student performers to showcase their talent while trying to attract creative minds to the La Pluma literary community.

“I think Coffeehouse is my favorite event of the whole year,” La Pluma treasurer senior Diane Chong said. “It’s a little dose of reality in itself.”

Even though Coffeehouse featured the usual singing and poetry reading acts, this year’s event also included dancing. According to La Pluma secretary junior Tara Kumar, the officers wanted to diversify the acts at the event.

However, the performers weren’t the only expressing their creativity. A haiku contest was also held in an attempt to encourage audience members to participate more actively. Several of these submitted poems will be featured in the next issue of S&S La Pluma‘s pamphlet publication. And of course, there was an abundance of coffee and pastries for the attendees to munch on.

“To its core [the event is] supposed to be a fun [place] where writers — not only writers but also all these other [artists] — can come and interact,” said junior Prathyusha Charagondla, a La Pluma selections editor. “We just want to set up the whole coffee shop environment so people can come in comfortably, sit and watch their acts and have fun.”

There were some technical difficulties with the microphones, which caused slight trouble during the first couple performances, but the officers managed to resolve the issue quickly and proceed with the event. Chong expressed that despite these difficulties, the audience still enjoyed the event.

Overall, La Pluma Coffeehouse proved to be an engaging and unique experience for both performers and audience members. The close knit atmosphere provided a much-needed break for students and exposed them to new musical styles and performances.

“It’s a very constructive environment,” sophomore Evan Zhang said. “I changed my song at the last minute, but most of the people sitting down were performing too so they had the same [nervous] feeling.”