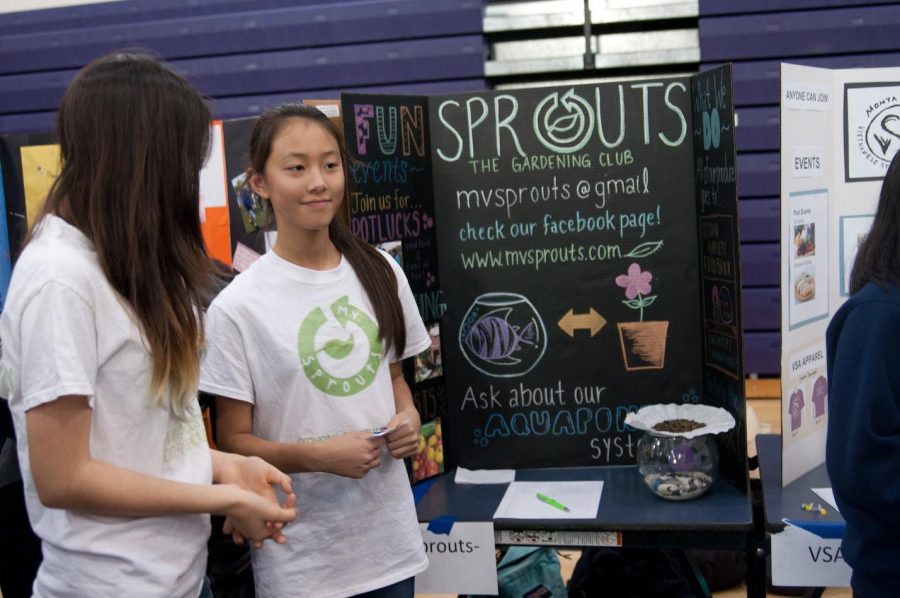 MV Sprouts officer sophomore Ada Chen greets the student body to present the club. The plant in front of the stand is from the Matador Meadow. Photo by Catherine Lockwood.

63 clubs participate to recruit more members for the second semester.

On Club Promo Day, students from all grades crowded the gym which had booths containing visual aids, cupcakes, candy and television screens. Club Promo Day was held Jan. 10 at lunch in the main gym with 63 participating.

Funding for second semester
Clubs had a particularly challenging year trying to keep themselves afloat because of a new California law which prevents any club from requiring for a membership or activity fee. The law was put in action by Gov. Jerry Brown to reduce the burden for low income families.

According to Club Commissioner senior Zerreen Kazi, most clubs depend on Club Food Day funds to support themselves for the rest of the semester. Club Commission encourages clubs to hold fundraisers as well as joint fundraising events where several clubs would be able to work together to raise money.

Promo Day versus Food Day
Club Commision has also held several surveys through Legislative Counsel among the club presidents and the student body to determine whether Club Food Day would be held in January or March. According to the survey results which were tallied during the end of the first semester, both the clubs and the students favored March.

“Because of scheduling, we wouldn’t be able to have Club [Food] Day the week after Club Promo Day [in January],” Kazi said, “The clubs felt they could do Club Promo Day successfully, relax a bit and have enough time to prepare for Club Day.“

According to a poll conducted by Club Commission, the clubs also prefer to have Club Promo Day on a Friday rather than the Thursday before Club Food Day because it reduces stress for the club officers when preparing for the events and students get a chance to appreciate both days.

“We are further into the year,” Club Commissioner junior Rachael Plouse said, “so [students] have a better idea of what what their workload is and what commitment you can have to [clubs].”

Promo Day Strategies
Clubs used various tactics to get the attention of students.

Both DECA and Rex Productions had televisions to add to their presentations. DECA had a video of various officers explaining their “pitch” to the student body, while Rex Productions displayed a trailer of “Second Chance,” their most recent short film.

Operation Smile gave out significantly more food than the rest of the clubs by offering candy and cupcakes. Several other clubs had props that symbolized the essence of their club including MV Sprouts’ plant, Anime Club’s drawings and Fashion Club’s dresses.

Octagon stood out by shooting a single free t-shirt into the air just in front of their stand, attracting a crowd of people.

New clubs such as Anime Club and Japanese Club presented their clubs with ideas for the semester.

“[Club Promo Day] is important for the new clubs to expose themselves to the student body,” Club Commissioner sophomore Naomi Wang said. “It their first chance to bring their club out and have people join them.”

Club Promo Day ended on a positive note as sign-up sheets filled front to back with names of prospective members and clubs –– old and new –– had the chance to interest the student body.