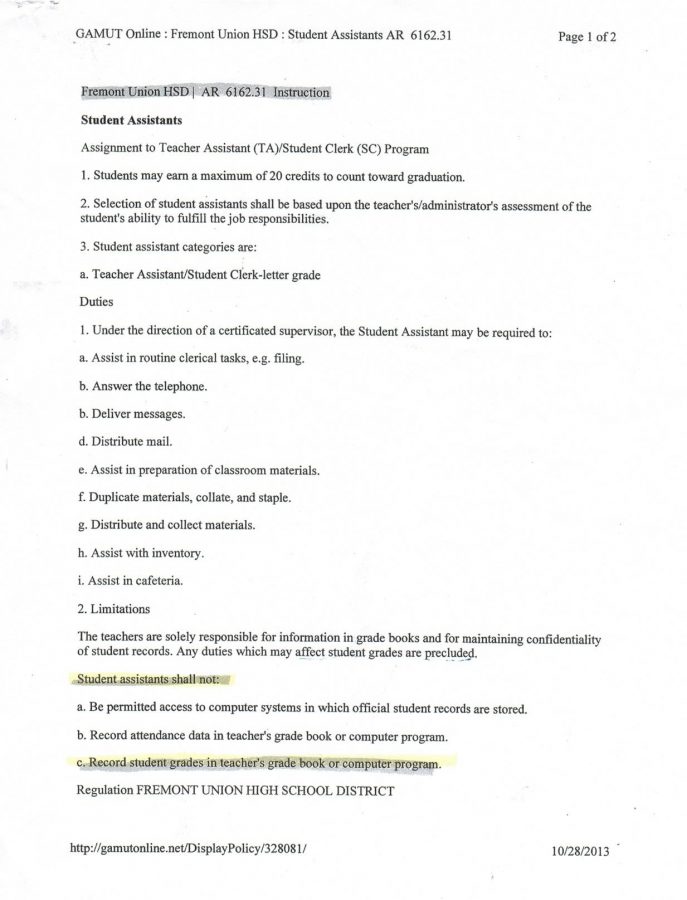 Most of the TA duties listed in the FUHSD student assistance policy sheet are clerical tasks like answering the telephone and delivering messages; anything that involves viewing another student’s record is forbidden. However, despite the rules, most teachers allow their TAs to grade papers. Photo by Shuyi Qi.

[dropcap1]W[/dropcap1]alking into a classroom, it is not uncommon to see a teacher’s assistant passing out handouts, filing documents, or hunching over a stack of papers with an answer key, grading the students’ assignments — grading your assignment.

This was the issue recently emphasized at a staff meeting in October and in an email sent to the staff by Principal April Scott: TAs are not allowed to grade any assignments to prevent biased grading and invasion of privacy.

According to the FUHSD student assistant policies, “… teachers are solely responsible for information in grade books and for maintaining confidentiality of student record. Any duties which may affect student grades are precluded.”

“The only one who should have access to student records is the teacher, the student and obviously the student’s family,” Scott said.

According to Scott, the issue was brought forward to the staff by a recent incident in which a TA discussed another student’s grade with the student’s older sibling.

“Then the discussion went home, and mom and dad are saying, ‘Well, why is it that the younger [child] is being discussed with anybody else? Shouldn’t it only be between my younger child and the teacher?’” Scott said. “Every year something similar comes up.”

Interpretation of the policies

Teachers are aware of the TA policies since they are clearly outlined every year when the issue is addressed at staff meetings, according to French teacher Sarah Finck. However, the same policies aren’t so clear to the TAs themselves.

Senior Aditi Ramaswamy, who TAs for English teacher Mark Carpenter’s American Literature Honors class, said that she never was fully aware of the exact TA policies, particularly ones regarding grading; she has only graded one reading quiz containing short answers at the beginning of the year.

“I usually don’t grade stuff… but I will correct stuff,” Ramaswamy said.

She says that she is also aware of other TAs grading work, including one particular TA who takes some part in grading essays for an unnamed teacher. However, Ramaswamy doesn’t know the extent of the TA’s involvement in the grading.

“Usually what a TA does is tertiary stuff like filing, record grades in the scorebook, review in general work done by a kid given specific instructions by a teacher,” Platt said. “It’s never a task used to determine what their grades would be… I do all the grades [for] the essays.”

[quote_center]“Just seeing a person’s name isn’t a super invasion of privacy,” she said. “[TAs] don’t have access to the gradebook, of course, so they don’t know [the student’s] grade. I highly doubt any of [the TAs] is keeping a tally [on the grades].” -Senior Aditi Ramaswamy [/quote_center]

Although the TA grading policies are meant to prevent biased grading and invasions of student privacy, both Ramaswamy and Finck think that the rules should be less strict.

“I don’t believe that we should be allowed to grade essays or anything really big like that,” Ramaswamy said. “But stuff like multiple choice quizzes or something with an answer key [is something] I’m capable of doing.”

According to Finck, who doesn’t allow her TAs to grade any assignments, a system where TAs use answer keys to grade nameless papers to protect privacy would lighten the workload considerably for teachers. However, she maintains that subjective material like essays should be graded by teachers only.

Yet, Ramaswamy believes that seeing a student’s name on an assignment is not a breach of student confidentiality.

“Just seeing a person’s name isn’t a super invasion of privacy,” she said. “[TAs] don’t have access to the gradebook, of course, so they don’t know [the student’s] grade. I highly doubt any of [the TAs] is keeping a tally [on the grades].”

While Scott agrees that there might possibly be some exceptions within the policies, she still stands by the FUHSD policy.

“We could create all the ‘what if’ situations. The best thing I can do is say [to teachers,] ‘be cautious, be respectful [and] honor the confidentiality of your students,’” Scott said. “Don’t ever put another student in a situation where they’re being made to make a decision that should be made by [a teacher].”