The unsung experts of ‘Almost, Maine’ 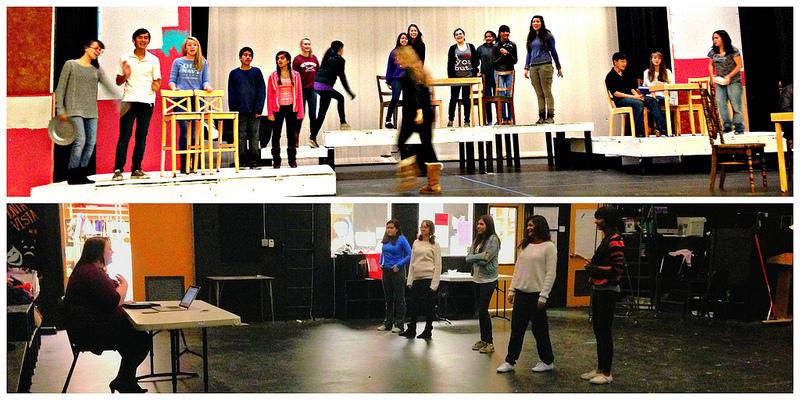 The ensemble cast (above) rehearses a key scene in the beginning of the play. This is a complex arrangement with a large number of castmates involved, so each person must be aware of his or her surroundings. Photo by Sophia Tao. The members of the choir (below) laugh good-naturedly as vocal coach Sheila Townsend offers positive criticism about their performance. It took a few attempts, but they eventually performed the piece to her satisfaction. Photo by Harini Shyamsundar.

This story was reported on by Harini Shyamsundar and Sophia Tao.

Juniors Corena Lentz and Nayanika Raj and sophomores Osher Fein, Emaan Khan and Fatima Mejia stood huddled in a semi-circle around their vocal coach, Sheila Townsend, after having just rehearsed the song “Love Somebody” by Maroon 5 in the Black Box. It was exactly one week before the premiere night of “Almost, Maine.”

“I need you to walk with purpose,” Townsend said. “I need you to take your hands out of your pockets, shoulders back. You are young, strong, amazing women, and you have rockin’ voices.”

This seemed to be exactly the encouragement that the girls needed.

“This is the best one!” Townsend said, when the girls had finished their second rendition of the song.

The girls smiled, and moved into position to start rehearsing the next song on the rather long list of contemporary pieces that were to be featured in “Almost, Maine.”

“You are young, strong, amazing women, and you have rockin’ voices.”

According to Townsend, the choir is a unique addition to this drama production but one that has already proved popular with its members.

Besides being an a new development, the choir provides something to “Almost, Maine” that is much more relevant to the play itself: structure.

During almost every scene, a song highlights the play’s underlying theme about the innocence of love. From the choir’s more lively and exuberant “I Gotta Feeling” by The Black Eyed Peas to its sweet, stirring rendition of Mary Lambert’s “She Keeps Me Warm,” the choir covers it all, mixing into the play a musical tangibility.

“We wanted music that would fit with the scenes — each individual scene,” Mejia said. “For a lot of the songs, we would read through the scene and be like, ‘Oh, this song is good for this scene!’”

The members of the choir are quite satisfied with how “Almost, Maine” has unraveled, as well as with the role that they play in its framework.

But the ensemble, also called the townsfolk, of “Almost, Maine,” quickly realized that their roles in this play were much more than acting as the background.

“The other ensemble members and I realized very early on that without us, the show wouldn’t work,” said freshman Grace Nevitt, a member of the ensemble cast. “We set the atmosphere. [We] help pull the show together [and] make it more realistic.”

Between each scene transition, the ensemble members get their chance in the spotlight. Each transition contains little stories that relate to the next scene, which the ensemble acts out.

“Usually if you’re in the ensemble, you’re like an extra,” Nevitt said. “But in this show we’re doing all the scene changes, so it’s more interactive — we’re doing [the changes] instead of the tech crew.”

According to freshman Advait Gadre, also an ensemble member, without the ensemble, there wouldn’t be a transition to the next scene. If the ensemble did not exist, the scene transition would be very abrupt.

But there are no transitions in the original written script of the play. The cast first read through the play with Drama teacher Sara Capule and movement director Kim Saunders. Capule and Saunders then created situations for each transition that corresponded with the next scene, since each scene has its individual story.

The ensemble members take their roles seriously. Nevitt says they act with the situation or story they are given, and some even go further than required by creating backstories for their characters during the rehearsal process.

Though the ensemble members do not deliver lines, their roles still contribute significantly to the plot. Nevitt and Gadre agree that their background stories during the transitions are a significant part of the play.

“I don’t know if it’s in all plays, but in this play, if you’re a [member of the] townsfolk, you actually have an opportunity to be something big,” Gadre said. “We get a lot of facetime, so I actually like being a townsfolk.”