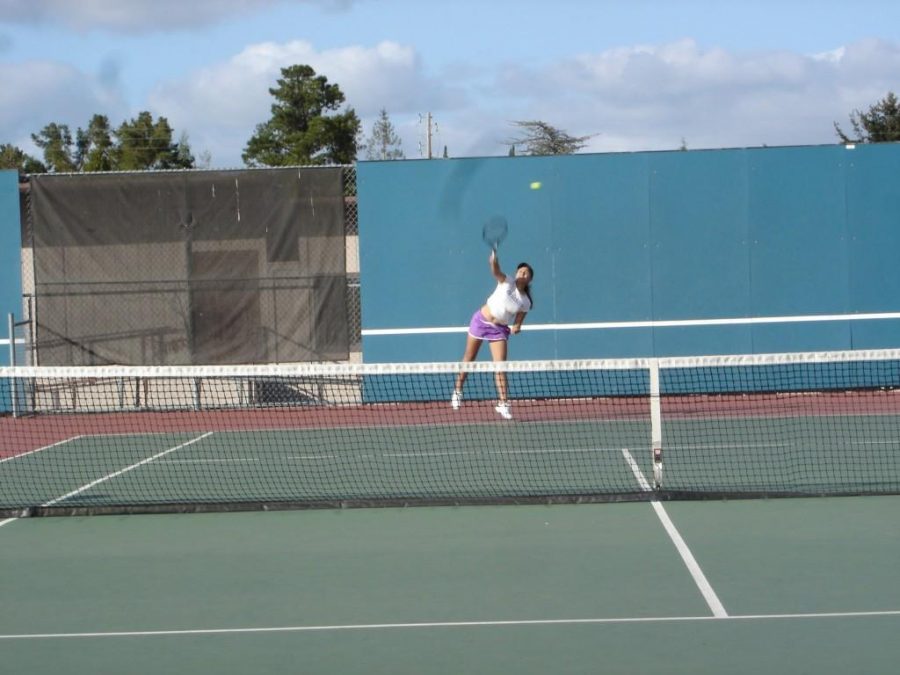 For most of the season, Girls Tennis has managed to overcome obstacles and weather the proverbial storm. The Lady Mats have endured the loss of key players who have graduated, moved or decided to enroll in College Now at De Anza College, rendering them ineligible to play for the team. Injuries to co-captain senior Claudia Kesala’s shoulder and top singles player junior Aiswarya Sankar’s wrist failed to slow down the team, as proven by the team’s overall record of 16-4. But on Oct. 28, in a rescheduled match against Menlo High School, not even gritty effort, determination and sheer will to win was enough as the Lady Mats dropped the tightly contested match 4-3 at home.

“It was disappointing losing in such close fashion, but the important thing is that we fought to the end,” Coach Gene Fortino said.

Filling in the top singles spot for Sankar, co-captain senior Kelsey Chong dispatched MHS junior Liz Yao 6-3, 6-1. But Chong’s opponent made her work for the victory, with rallies between the two players often lasting 30 seconds or longer. In the end, Chong finally wore down her opponent and emerged with the win. Senior Jenna McGuirk started out strong in the number two singles spot, but faltered in the end and lost confidence in the final two sets, losing 6-3, 4-6, 2-6.

Junior Nicole Stomakhin frustrated her opponent, MHS freshman Alice Yao, causing her to shout expletives and to chastise herself. However, Stomakhin wasn’t free of frustration, as she banged her racket on the court after miscues. But in the end, she rattled her opponent enough to cause some crucial errors, giving herself the comfortable win after a closely contested first set in three sets, 6-7, 6-1, 6-2.

The doubles matches featured the sophomore tandem of Shaili Davuluru and Anna Kang, who were in complete control, with the exception of a few communication errors on balls that never got returned by either player. Both had command of the court and asserted themselves in a 6-0, 4-6, 6-1 win over the MHS pair of freshman Georgia Anderson and sophomore Mia McConnell. On the flip side, however, junior Katherine Guo and sophomore Anuskha Tyagi never felt comfortable in their match, falling in straight sets, 2-6, 3-6 to the MHS team of senior Paulina Golvova and sophomore Melissa Tran.

All eyes fell on freshman Laura Cao with her game against MHS junior Helena Ong proving to be decisive. Both teams crowded around the court to provide moral support and witness the back and forth affair. But when Cao’s volley hit the net, the roar of triumph did not come from MVHS, but MHS — something the Lady Mats have not been accustomed to hearing this season.

Since this was a non-league match, it did not affect their SCVAL race in the De Anza division with Saratoga. Both teams have identical 8-1 league records, with losses only coming against each other. MVHS’s last regular season home game, Senior Night, is on Oct. 29 against Los Altos.