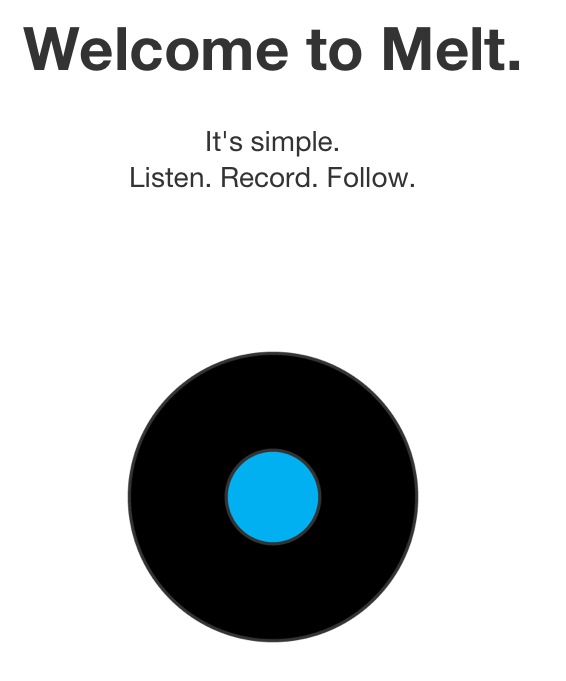 Melt is a new iPhone app that uses podcasts for social networking. Homestead High School Class of 2005 alumni Jason Lew and Shane Wey created the app because they felt that voice was a unique platform that has not been used often in social networking. Screenshot by Joyce Varma.

Class of 2005 Homestead High School alumni Jason Lew and Shane Wey were sitting in a coffee shop in the Mission district of San Francisco, trying to come up with a name for their iPhone app. They had been agonizing over it all day, with little result.

“Shane was looking at the menu and was like, ‘How about ‘Melt?’ because he had seen on the menu like ‘Tuna Melt,’ Chicken Melt,’ ‘Turkey Melt,’” Lew said. “And I liked it immediately.”

Wey described Melt as a “Twitter for voice,” a social networking platform that uses micro-podcasts called “melts” rather than text to connect users. Users can make voice recordings up to three minutes long, and broadcast them on the free iPhone app. To listen to and keep up with each other’s melts, users can follow one another and reply to melts in “meltversations.” Users can also share melts on Facebook and Twitter.

“With text, a lot of dimensions get lost like your taste, tone, your personality, that come through in voice,” Wey said. “With video, like on Instagram and Vine, all the focus is being put on what’s being seen, but for us, the focus really is on what’s being said, the content of what you’re saying.”

Lew and Wey –– formerly an engineer at Apple and a consultant at Accenture respectively –– remained friends after graduating high school, and came up with the idea for Melt earlier this year. Before thinking up Melt, Lew and Wey worked on an event-planning site together, but decided to stop working on the project because it didn’t work out how they wanted it to, and decided to think of a new idea. In the brainstorming process that followed, Lew and Wey went through fifty different ideas, including ones for a dating site and messaging for businesses, before they stumbled upon the idea of using voice recordings to social network.

To test the marketability of their idea, Wey posted SoundCloud recordings of his own voice on his Facebook timeline, and found that the recordings were getting comments and hundreds of plays everyday. For the next four months, Lew and Wey developed the app.

Lew and Wey, for the most part, have been marketing Melt themselves through emails to student groups and high schools. In addition to this, when melts are shared on Facebook or Twitter, others can click on them and discover Melt.

According to Wey, Melt is used throughout the world, ranging from Iowa and Memphis to the Dominican Republic and Indonesia.

“As my wife said when I played her a few of the original melts, ‘It’s so intimate!’” a Melt customer said to Lew in an email. “But, that is the beauty of it. I enjoy hearing other people’s voices and inflections as they share their melts.”

“I think high schoolers could use [Melt] because it’s easier to hear someone’s true emotion through their voice than through what they write,” Datu said.

Melt can be downloaded for free from the iTunes store here.