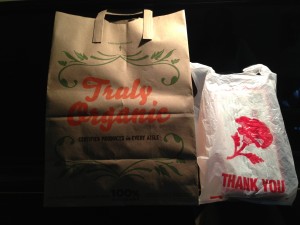 On April 26, 2011, in a 4 to 1 approval, the Santa Clara County Board of Supervisors voted to ban single-use disposable plastic bags and impose a fifteen-cent fee on reusable paper bags. The ban became effective on Jan. 1, 2012.

While the policy has been in effect in neighboring cities such as San Jose, San Francisco and San Mateo, a similar policy was recently made effective in Cupertino on Oct. 1.

According to the Cupertino Ordinance of March 5, “All retail stores are prohibited from giving single-use plastic carryout bags to customers and are allowed to charge ten cents for any recycled paper bag.”

Over the past few weeks, grocery stores and markets across the city of Cupertino have been changing their bag policies. No longer are they allowing customers to take free single-use bags. Instead, stores are now promoting the utilization of reusable bags for shopping, since these are more eco-friendly than plastic ones.

However, this rapid change in a social custom is concerning to many people.

A customer of Whole Foods Market in Cupertino expressed contempt toward the new policy.

“I really think 80 cents is too expensive for paper bags,” he said. “People should not have to pay for that.”

Ultimately, after transferring all the food items from the paper bags into his car, the customer went back to the Whole Foods’ customer service counter to return the eight paper bags and asked for a refund. As a result, he received his money back, and walked away slightly annoyed with the store.

Customer dissatisfaction is a factor that may also lead to markets suffering a decline in consumer rates and productivity. Students have also expressed disapproval toward the new ordinance.

“I personally don’t like the idea of paying for paper bags,” freshman Adarsh Parthasarathy said. “In fact, it causes me to lose the will of shopping at these markets.”

Parthasarathy believes that stores should not impose a fee on every paper bag that customers use to carry out items. Many people do not own reusable bags and can only resort to using paper bags since paper, unlike plastic, is biodegradable.

Nonetheless, some students view the ban on plastic bags as a way of finally spreading environmental awareness and protection.

“I totally agree with the bag ordinance,” junior Harshitha Sriraman said. “Not using plastic bags is very important to our community. We can’t just help the environment by taking small steps, we have to make constant changes.”

As a member of the Cupertino Teen Commission, Sriraman even advocated for an expansion on the City Council’s Bag Ordinance to include food establishments.

Sriraman’s family has not actually experienced much of a drastic change with this new policy. As constant customers of Whole Foods Market and Trader Joe’s, they have long been using reusable bags when shopping.

“We have bags that we’ve purchased over the years, and we always keep them in our car, so we can remember to take them when shopping every time,” Sriraman said.

Sriraman believes that Cupertino’s bag ordinance is a necessary step to ensure that all those who have previously been indifferent toward this particular environmental hazard can finally begin to take initiative as well. According to her, it is their opportunity to become a part of a duty and responsibility with which every citizen must be involved.

“When it comes down to it, banning plastic bags has both social and cultural impacts to our lives,” Sriraman said. “It is very important to our environment and to the future of our world.”