Behind the scenes: Coaches and coordinators facilitate activities away from the spotlight 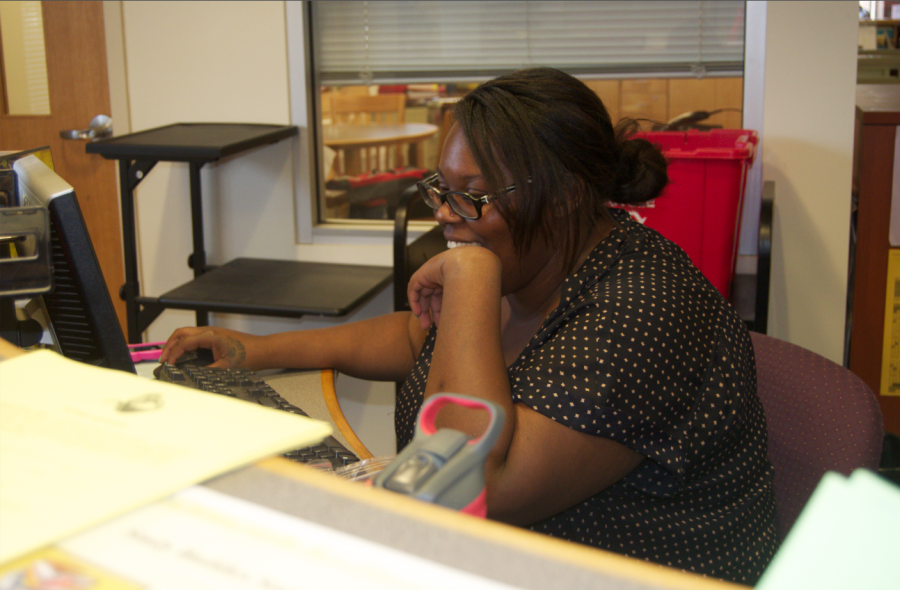 Monique Balentine sits at the desk where she coordinates the Study Buddies Society program. She organizes student tutors so that struggling students can be helped. Photograph by Tanisha Dasmunshi

Tanisha Dasmunshi
[col type=”1_2″ class=””][title type=”h1″]Monique Balentine[/title] Study Buddies Society [divider type=”space_thin”] [dropcap1]F[/dropcap1]or three hours a day, Monique Balentine runs the Study Buddies Society program in a quiet corner of the library — often unseen. Although she has been at MVHS for three years now, she has not seen much of the school beyond some of the Study Buddies sessions she hosts and coordinates in which student tutors are paired with failing students to work after school. Similarly, many students haven’t seen her either.

Outside of aiding high school students struggling with their classes by organizing the student tutors, Balentine is an instructional assistant at both a preschool for children who have special needs as well as a classroom of adults trying to get their high school diploma. She works with students who need more help than usual, or who have fallen off the traditional path to success.

“My younger brother’s experience was different from most students — he actually went to a continuation school,” Balentine said. “And it was only after he got there and met a counselor who really guided him, and had teachers who were a little more supportive to him that he eventually graduated. It kind of ended up leading me to work in counseling.”

Balentine believes that SBS provides an important support for MVHS students, even though there enrolled in the program. A failing student who asked for help last year ended up passing all of his classes.

She remembers that during on his last SBS sessions, Balentine and the student were sitting with another tutor and a tutee, and to everyone’s surprise, he answered a question that was actually addressed to the tutor.

[quote_center]”SBS is not a stand-out part of the institution of MVHS, not everyone knows about it like, say, the way they know about the football team. But it’s still key, for the students that need it.”[/quote_center]

“He was on track to graduate,” Balentine said. “But more importantly, he was finally engaged in his education. It was amazing to watch him open up to academics.”

According to Balentine, SBS serves as a safe place for students who are unwilling to open up about being pressurized by the intensely academic environment at MVHS. According to senior Ria Bhatt, who has been an SBS tutor for two years now, many students do not admit that they are failing until it’s too late because of the stigma associated with low grades at school. For these students, SBS is a place to seek help without feeling ashamed.

“SBS is not a stand-out part of the institution of MVHS, not everyone knows about it like, say, the way they know about the football team,” Balentine said. “But it’s still key, for the students that need it.”

Bhatt had a similar experience with one of her tutees, who evolved from being shy and bored to outgoing and motivated.

“Ms. Balentine was so supportive in that process,” Bhatt said. “She’s so easy to talk to — and you can go to her for anything.”

For Bhatt, as well as her fellow tutors and tutees, Balentine is a key part of SBS.[/col] [col type=”1_2″ class=””][title type=”h1″]Alex Friedman[/title] Mock Trial

[divider type=”space_thin”] [dropcap1]T[/dropcap1]he school is nearly deserted when Mock Trial gathers to work through their cases at 6:30 p.m. on a Thursday. They read through a case study together, making observations facilitated by one of their three coaches — all lawyers, each of whom takes turns coaching the team. Alex Friedman, the coach working with them today, is not very well known at MVHS — but he is one of the coaches who has helped Mock Trial become successful.

For Friedman, coaching at MVHS was a culture shock. Having attended a high school with an environment completely different from MVHS’ academia-focused one, Friedman was unprepared.

[quote_center]”Law is creativity — it’s the ability to take certain rules or facts and pick them apart.”[/quote_center]

“While my high school, Berkeley High, did provide programs for the most academic students, most of my friends and I didn’t engage in that as much,” Friedman said. “I feel like we struck a balance between fun and work.”

When he asked his students what they did for fun, a lot of them replied with “study.” For this reason, Friedman enjoys his role as a Mock Trial coach — as he’s not a parent or a teacher, he has the freedom to push the students to move beyond just studying. He believes that his main contribution to MVHS is creativity.

“Law is creativity — it’s the ability to take certain rules or facts and pick them apart,” Friedman said. “You can only succeed at law by being creative.”

Senior Priyanka Bapat, a first-year member of Mock Trial, agreed. She said that Friedman encourages creativity just through his persona. Because the students are comfortable around him, they feel more free to suggest more creative ideas.

“He’s usually just a happy person, with a grin on his face that makes you more comfortable around him.” Bapat said. “He’s about the same age as some of our teachers but it feels a lot more relaxed to work with him.”

According to Bapat, Friedman doesn’t take the “teacher’s” role during their meetings— he listens, and then guides them in the right direction.[/col]