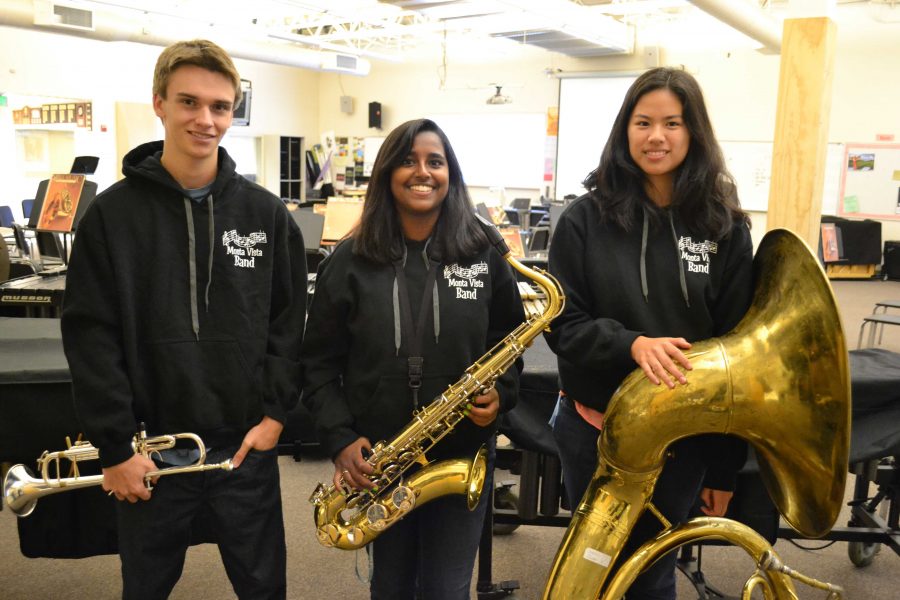 Seniors Mike Thomas, Anu Vaishnav and Connie Guan display their instruments and matching band sweatshirts. With the cancellation of the program, they will lose the experience of competing as marching band this year. Photo by Yashashree Pisolkar.

The bell for fourth period rang as senior Anu Vaishnav walked past the drill of cafeteria construction toward the F-building. It was the second week of school, and this Monday morning felt as uneventful as usual––until she walked through the double doors of the band room.

As Vaishnav entered the building, she froze. She looked to her left where all the Marching Band uniforms hung on the clothing racks. She spotted her drum major uniform, the nametag still pinned to the plastic cover. Vaishnav will not be marching in that uniform for a while.

Two weeks into the beginning of the school year, Marching Band director Jon Fey announced the cancellation of Marching Band for the year. Although the team was shocked by the news, stressors such as lack of student interest and budget conflicts were long within the purview of the music department. Nevertheless, Vaishnav and her teammates believe that camaraderie, passion and the will to engage in other band-related activities will fill the void and get them through their disappointment.

The Saturday after the first week of school was particularly trying for Vaishnav and her Marching Band teammates. Vaishnav, who is the head drum major, and junior Victoria Morris, who is the assistant drum major, recalled feeling uneasy as this particular practice was a lot less structured than usual. According to Morris, there was not much rehearsal going on. When the students arrived for their 9 a.m. practice, Marching Band director Jon Fey asked the upperclassmen and sophomores and freshmen to congregate in separate rooms. In groups, the returning band members were asked to generate a list of the qualities of Marching Band that they appreciate. Meanwhile, in the other room, the freshmen were asked to fill out a questionnaire indicating their interest level in Marching Band if the program was made optional––given the fact that in previous years, incoming freshmen did not have the option of choosing between Marching Band and Pep Band.

“Unfortunately, not enough freshmen indicated their interest in the activity,” Morris said.

After the results of the survey were tallied up, Fey revealed to his students that Marching Band will be dissolved for the remainder of the school year. It was with heavy hearts that the band students accepted the news.
“It didn’t register,” Vaishnav said. “It honestly did not register in my mind.”
The cancellation of Marching Band was an unexpected occurrence for most of the band students. The program had a history of ups and downs regarding student interest; students involved in Marching Band in 2011 petitioned to preserve the program when administration contemplated its functionality on campus. Although the program was saved, the music department again saw a significant decline in student interest last year––partly why Marching Band stopped competing.

The music department remained optimistic about the band’s future nonetheless. According to Vaishnav, the team brought home first and second place trophies from competing in street marches and parades throughout 2010 and 2011. The winning streak began when Marching Band and Color Guard took first place in Fairfield at the 2010 Armijo High School Band Review competition after six unsuccessful seasons.

At beginning of last year, however, Marching Band was forced to withhold from enrolling in any competitions. Despite the petition, Marching Band lost half of its members and therefore could not sustain the competitive aspect of marching. Instead, Marching Band was only responsible for representing MVHS during football games by performing at halftime alongside Pep Band, a subsection of band that does not compete.

Along with a decrease in student involvement, budget concerns were another prominent factor that contributed to Marching Band’s dissolution. Though the program had initially been sustained through a portion of the music boosters budget, the music department could no longer justify the expense after losing a majority of Marching Band participants.
“We tried to direct our resources to sheet music, training staff, and other [necessities] of the program,” Fey said. “Ultimately it’s not justifiable to spend 30 percent of the $50,000 budget on just 10 percent of the [music department] students. We have to redirect the resources in a place where a majority of the students will benefit.”
The music department’s mission to satisfy the needs of as many students as possible is reflected in Fey’s belief that many other positive components of the department are still intact and active.

“It’s not fun to see one [program] go,” Fey said. “However, we still have a fret choir, wind ensemble and a phenomenal chamber orchestra.”

Currently, the goal of the department is to fill the void caused by the cancellation of Marching Band and help students get over the initial shock. According to Fey, the music department is dynamic and constantly trying to provide eclectic opportunities that meet the students’ musical needs.

A year of transition

Fey and his Marching Band students hope that the program will be revived for the following year, but the likelihood of its resurgence cannot be determined with certainty.

“My favorite part about Marching Band was the people,” Vaishnav said. “[Also] the fact that we’re competing in a group… the sense that ‘I’m not alone in this.’ In academics you’re always competing against the person sitting next to you, but in Marching Band, we are competing as a group, a family.”

Despite their initial disappointments, the band students are still actively seeking new opportunities to compete and perform until next year’s verdict is made. While Morris and Vaishnav will continue their roles directing the Pep Band as assistant drum major and head drum major, respectively, their fellow Marching Band teammates––about all 130 of them––will join them by performing at home football games throughout the season.

Students will also participate in a separate team that will compete in the Winter Percussion competition beginning in April 2014. This percussion team will mostly be composed of band students as well as interested MVHS students who are not enrolled in the band elective. The winter competition is different from Marching Band’s street competitions in that it will only feature percussionists and will be modeled after a mini-field show which will take place in an indoor location like a school gym. According to Morris, the team will be ready to begin regular rehearsal in November. Members from Winter Guard will be competing with the percussion team.

“We have not competed as ‘Winter Percussion’ in a while, so we are trying to bring it back this year,” Morris said. “Our hope is that this new activity will raise our spirits once again.”