Laser tag is the newest addition to Homecoming Week 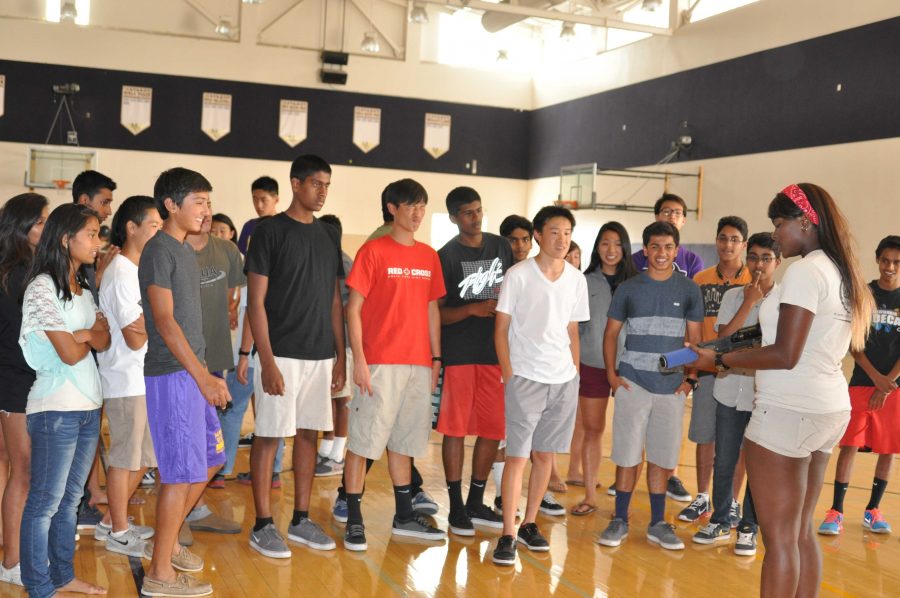 The sophomores gather to listen to the laser tag proctor’s instructions about the game rules and area boundaries. Photo by Manasa Sanka.

MVHS rallies Homecoming spirit with the addition of a laser tag game on Sept. 19.

Last Friday, students indulged in a war between the classes. A war with lights, headgear and inflatables. The four classes engaged in a laser tag war to earn Homecoming points.

A new addition to increase the hype for Homecoming week, this game took place after school on Thursday Sept. 19 in the field house. “We wanted to have laser tag since Powderpuff was gone and moved to second semester… and [this] is something new,” senior Saliq Hussaini, the organizer of this event, said.

A company in San Diego that specializes in external laser tag setup brought and set up inflatable obstacles, tagging gear and laser guns after school according to junior Jeremy Wang. As the field house filled with participating students, required waivers in hand, the timings had to be adjusted due to the travel distance delay.

“Unfortunately, the [company] had car troubles on the way in because they were coming from a different city so they arrived an hour late … but everything has been running smoothly since then,” Hussaini said.

The games, which lasted until 7 p.m, were modeled after a normal laser tag game. Two teams, a red team and blue team, aimed and shot lasers at the targets located around the opposing team’s players’ heads. The field consisted of several types of inflatable obstacles, including boxes of dynamite and an army tank. Both teams started at their home bases at opposite ends of the field behind a large wooden barrier. Once the proctor called the start of the game, the students fanned out to find a better vantage point and get closer to the other team.

“Laser tag really helps Homecoming and increases the competition,” sophomore Michelle Wang said. Of the 100 total points available for Homecoming, laser tag is worth five points. Each class earned a score out of five in these games based on their performance that will count toward the final tally of Homecoming points that will be announced at the end of the week.