Powderpuff to be postponed because of early Homecoming 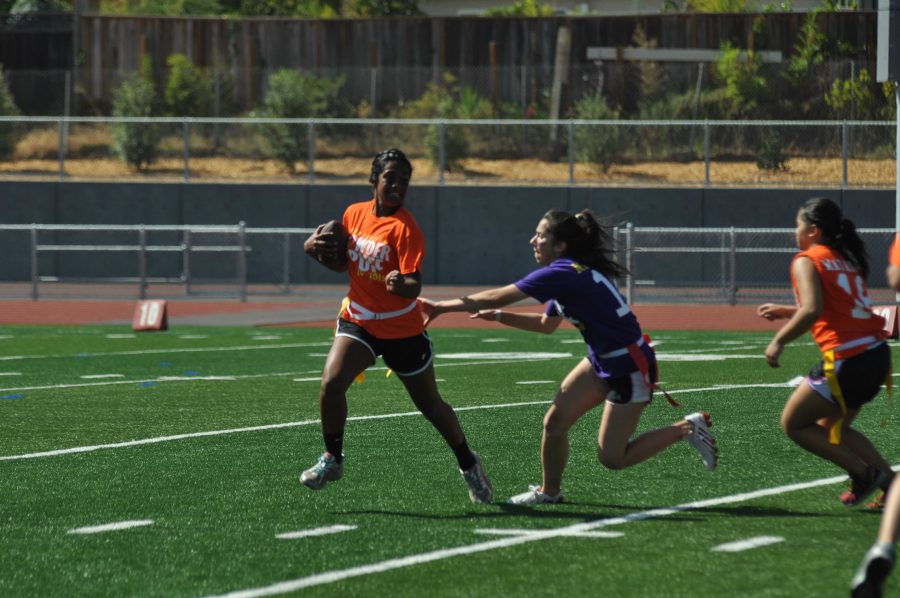 Senior Amy Spelick chases down freshman Kirthi Gomatam in order to get a sack in last year‘s powderpuff. This year Powderpuff will not be at the same time as the homecoming celebrations. Photo by Margaret Lin.

Homecoming week has traditionally included events such as the football game, eponymous rally and the Powderpuff games and cheers. In the past, all of these activities took place in mid-October, but this year, Homecoming is during the week of Sept. 23. This means that Powderpuff has to move as there is too much of a time crunch on Leadership because Leadership does not have the time to host a flag football tournament on top of all the other Homecoming preparations. The date of the tournament has not been specified as of now.

“Classes would only have four weeks to get their teams together and ready,” ASB Secretary senior Tijani Karaborni said.

According to Karaborni, the lack of preparation would cause a Powderpuff game held during Homecoming to be boring for the spectators. Students typically fill the stands to watch fast-paced football as well as the halftime dance moves of their class cheerleaders. Karaborni said that Leadership does not expect students to fill up the stands for sloppy football and unorganized cheers.

“Obviously seniors have experience and they know what’s coming, and they prepare way in advance, but as we go down… juniors, sophomores, freshmen, giving them enough time to have a shot so it’s fair playing ground for everybody, that’s what it’s all about,” Leadership advisor Jenna Smith said. “That’s what it’s all about, so we didn’t want to set anybody up for a lack of success.”

Now that Powderpuff has been postponed, students from all classes will receive an appropriate amount of time to prepare. However, Leadership has yet determine its new date.
According to 2017 Vice President Vanshika Desai, “Powderpuff could take place anytime during the school year”.
Powderpuff will most likely be scheduled for second semester because of the lower chance of rain and more bearable weather for those in the stands, according to Karaborni. Leadership is currently trying to find a time slot in which Powderpuff will not interfere with AP testing, finals, SAT and ACT testing or any of the dances.

According to Karaborni, Leadership is also looking at possibly having two Powderpuff events–– one being football and the other being a sport that can be played during the colder and more rainy part of the year. He stated that among other sports, they were considering dodgeball handball and basketball. This would provide an alternative for athletes who are worried about injury. Injuries have happened in years past resulting in athletes losing seasons and sometimes even scholarships. According to Karaborni, the main thing is that Powderpuff is not negatively affected by the move