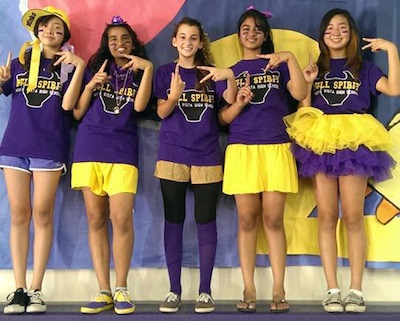 The 2017 class officers stand in front their class’s rally poster at the Welcome Back rally. The officers were elected by students from their respective middle schools in May 2013. Used with permission of Lian Song.

Typically held in September, the freshman class officer elections were instead held in May due to earlier Homecoming schedule.

The Class of 2017’s freshman class officers were elected by students from their respective middle schools in May 2013, more than three months earlier than usual. The changes in the process and the date were made due to complications regarding unbalanced representation from incoming students and disadvantages with class events.

“They’ve already picked class colors, their class T-shirt is designed, their quad dec is underway,” said Mike White, Assistant Principal and Leadership advisor. “[With the old schedule], right now they’d be running for class office. Now, they’re working, they’re able to organize all of that [and] they’re able to get things done.”

The freshman class often had a disadvantage when it came to Homecoming events because its class officer elections usually took place at the beginning of September, which left about a month to prepare the class for Homecoming events. The other classes typically start preparing in July, giving them a two month head-start. However, Homecoming falls three weeks earlier than usual this year, the week of Sept. 23, instead of the week of Oct. 8 like last year. This change would have limited their preparation time even further.

Because of the earlier Homecoming week, White worked with the Leadership class and ASB to employ a system in which the freshman officers were elected by students in their respective middle schools before the school year had even started, which gave them more time to prepare. Community Commission carried out the plan, and held the election for Kennedy Middle School on May 17 and the election for Lawson Middle School on May 22.

[quote_right]“It was unfair that [LMS candidates would] compete against people [from KMS] who have more friends [attending MVHS].” -Deepika Sriram[/quote_right]

“[Using this system, they had] better representation and fresher ideas — and because they were elected earlier, they [had more] time to get acclimated,” said ASB President senior Marisa Yang.

The freshman officers not only appreciated the extra time they had to prepare for Homecoming week, but also felt that the new voting system better represented both KMS and LMS, whose graduates make up a majority of MVHS students. For the past five or more years, every elected freshman class officer has been a KMS graduate, possibly due to the smaller number of LMS graduates who attend MVHS. This year, however, the new system allowed KMS and LMS to elect three and two representatives respectively to serve as MVHS class officers.

The new system allowed MVHS-bound KMS students to elect three representatives and LMS students to elect two representatives to serve as their class officers for the next year. After being elected, the representatives met with the 2012 – 2013 Leadership class and ASB to decide on each individual’s position. Freshmen and KMS graduates Maya Schwarz, Maddie Park and Shauna Cho were given the President, Secretary and Treasurer positions, respectively, while LMS graduates Deepika Sriram and Vanshika Desai were given the Social Manager and Vice President positions, respectively.

“It was unfair that [LMS candidates would] compete against people [from KMS] who have more friends [attending MVHS].” said Deepika Sriram, Class of 2017 Social Manager and LMS graduate. “They changed it this year so it would be fair, and the people that voted for you would actually know who you are.”

The Class of 2016 freshman class officer elections took place in September last year, the night before the first rally of the year. Last year’s Class of 2016 President, Bar Yosef, felt that this year’s elections being moved up was a great idea, and that it would have been helpful had it been implemented last year.

“We didn’t get to start quad decs over the summer like some of the other classes did,” Yosef said. “I think it was a better system this year [because] they had more time.”

As for next year’s elections, the date has not yet been decided. White, however, supports the idea of using this year’s system in the next year.

“I would do it again, but I don’t know that we will,” White said. “That’s not my call, Leadership will [decide].”