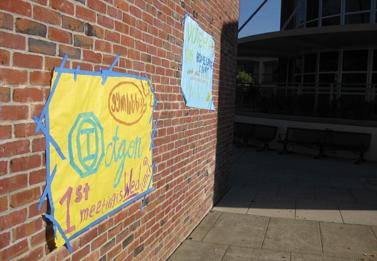 When senior Barak Gila wrote an open letter “To Monta Vista, with Love,” regarding Club Commission, he may not have realized that it would receive more than 700 views, along with a plethora of comments on the document in support of his point of view. The letter satirically pointed out the alleged flaws of the commission, the wrongful behavior of its commissioners and the problems clubs face when dealing with the policies commissioners try to implement. Let’s have a look at what he has to say, and what’s wrong with our school’s club regulation system.

Unelected Club Commissioners
The first problem Gila identifies with Club Commission is the fact that it is an unelected student body. Commissioners are appointed by ASB officers on a yearly basis, and ordinary students have no direct say in their appointments, thus rendering the commission relatively unresponsive to the opinions of the student body, especially in comparison to elected officers.

This format, however, is not unlike the one employed by the U.S. government in appointing the leaders of its regulatory bodies. Leaders and employees of agencies like the FDA, the CIA and NASA are all unelected officials, but are nominated and confirmed by those officials we elect to represent us.

Furthermore, having all the school commission positions be electable posts would result in a dramatic rise in the number of campaigns during election season, and would increase the burden on the average student when election day comes around. Indeed, if all 24 positions on the six school commissions were elected posts, election season would be quite a hassle for everyone involved. So, for now, as long as our elected ASB officers appoint our commissioners, having an unelected Club Commission doesn’t seem to be too bad of an idea.

Well, of course; everyone knows that cutting in line is both impolite and unethical. But so are torrenting, jaywalking and plenty of other petty crimes, crimes that many students commit every day. Even though it is not justifiable for people to do unethical things just because the rest of the world is, they are doing these things as individuals, not using any sort of official “Club Commision privilege.” Their personal behavior shouldn’t be used to paint black the proceedings of the commission itself.

The striking policy
Club Commission has a system of “strikes” that it supposedly uses to ensure that all clubs follow the established rules and regulations. If a club receives three strikes, it is disbanded by the commissioners. During Club Day, however, these “strikes” are used almost as whips by the commissioners. Gila points out that commissioners give “such meaningful advice, like ‘if you don’t fold this table we’ll give you a strike.’”

As a behind-the-counter participant of six Club Days, I personally have heard these very words come out of the mouths of various commissioners. Their intent is clear: Club Commission is willing to eliminate an avenue for students to participate in their school community and learn with their peers just because some officer of some club failed to fold a table in the rally court.

While the intent behind the strike system is understandable, the way it is misused by commissioners, regardless of the substantiveness of their threats, is both crude and deplorable. It would be equivalent to a scenario in which the Federal Commerce Commission (FCC) were to tell a company that it would be disbanded if the employees didn’t park their cars correctly. Indeed, Gila’s frustration with such rhetoric from our commissioners is quite understandable.

Rejecting new clubs
As Gila continues his satirical piece, he accurately identifies perhaps the largest flaw in the commission’s regulatory strategy: the procedure for forming new clubs. The concern among administrators is that students will form organizations for the sole purpose of being able to report officer positions on their college applications. For this reason, the school has been regulating the admission of organizations as school-sanctioned “clubs,” a process that involves preventing groups with goals similar to those of existing organizations from being created.

Let’s make one thing very clear: college admissions officers are experts at weeding out substantial officer positions from less substantial ones. Indeed, in the college application process, an officer position is worthless without details of the accomplishments during the tenure in office. If a club does nothing, it will not have members, and the officers will not have anything to show for their positions. In short, useless clubs will fail on their own.

In fact, if Club Commission were to stop regulating the admission of new clubs, students could gain valuable new opportunities in clubs with passionate officers that would have formerly been rejected by the commissioners. The school’s reputation would also benefit from the increased number of clubs on campus, giving it a chance to gloat about its many organizations, just as it boasts about its “85+ student clubs” on the school’s profile. So in the end, we don’t need a regulatory commission to play God to decide the merit of student organizations before their conception; basic human economics will take care of that.

The rights of Club Commission
In the many discussions regarding the merits of Club Commission, the commissioners are often treated as the ultimate authority in matters that govern clubs on campus. While Gila did not address this topic in his letter, it’s time we all understood that this perception is far from reality.

It may come as a surprise to many that Club Commission has no right to “reject” or “disband” the clubs on campus. All the commissioners can do is refuse to grant school recognition of an organization’s “club status,” a status which basically entitles the organization to participation in the various club days and gives it a place to store club funds.

There are no other benefits that Club Commission can legally withhold from a student organization; students have the right to assemble as a group, and even have the right to use school resources (after all, they are students of the school). Students can also have a teacher advisor for an organization that isn’t sanctioned by the school, and can legally use the words “Monta Vista” in their club’s name, since “Monta Vista” is also the name of a residential neighborhood in Cupertino.

So let’s make this crystal clear: just because Club Commission rejects or disbands a club doesn’t mean it can’t exist. Club Commission does not have any legitimate authority over the right of free assembly of students, a right that is guaranteed to us not by some amateurish contract with the school but by the First Amendment of our Federal Constitution. Each and every student at this school would do well to realize that we are not at the mercy of this commission; in reality, it pretty much has no power over us at all.

Contact the Administration
So while Gila’s piece does have flaws, it has sparked conversation about the problems of our club regulation system. Indeed, he quite proficiently points out how many of the policies that Club Commission operates under are illogically conceived, irresponsible and potentially detrimental to student learning as a whole.

What is most admirable about Gila’s letter, however, is not the letter itself, but the fact that he saw a problem on our campus and sought to inform the rest of the community about it. He didn’t sit and complain to his friends, like many of us have a habit of doing; he spoke out, and made his point clear to the entire school. And if we all, together, were willing to take a similar initiative and voice our opinions on the matter, we would most definitely see a change in the club operations of our school.