TED Talk showcase to be held on May 10 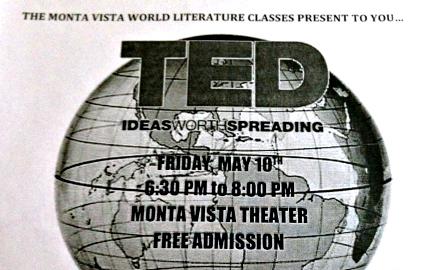 Vote for your favorite video to decide which idea should receive the $1,000 prize.

For the past semester, sophomores in Stacey Cler, Mikki McMillion and Jireh Tanabe’s World Literature classes as well as seniors in Sara Borelli’s Humanities and Tanabe’s Contemporary Literature classes have worked on five-minute video projects to illustrate a change they wish to see in MVHS or the world. The World Literature teachers submitted six video projects to administration on May 1, which then narrowed the field down to three. The top three videos will be presented at the TED Talk showcase in the auditorium on May 10, and awards will be handed out to the participants. The video with the highest number of votes will receive $1,000 to fund its vision. Votes from the poll on this page will be counted on Thursday, May 9 at 11:59 p.m.

Through this project, students have utilized English skills — such as communication, writing and storytelling — to learn other subjects and bring about change in the school. Sophomore Harini Shyamsundar, a student in Cler’s class, created a survey that received over 600 responses and indicated that the most stressful aspect of attending MVHS is the academic competition. Her group proposed the idea of a biannual kindness event to reduce the stress of competition through bonding opportunities.

“If it had been a research paper, it would have been less entertaining,” Shyamsundar said. “We would have learned less in the process. But since we did a video, we can actually get people to make the change. That was really the bigger thing. You go on a journey.”

Although the project is not a traditional research paper, it still involves the same skills. Students went beyond simply exploring their topic in-depth; they became businessmen. Some even spoke with professionals at eBay and Google while drafting assets and liabilities sheets.

“One of the most exciting things is to see the students start to feel passionate about something,” McMillion said. “Students have started to say that ‘Even if I don’t win, I still want to do this. I still want to see it happen and bring about change in this world.’ And that’s the most exciting thing: that it’s becoming more than something about just points or a grade.”