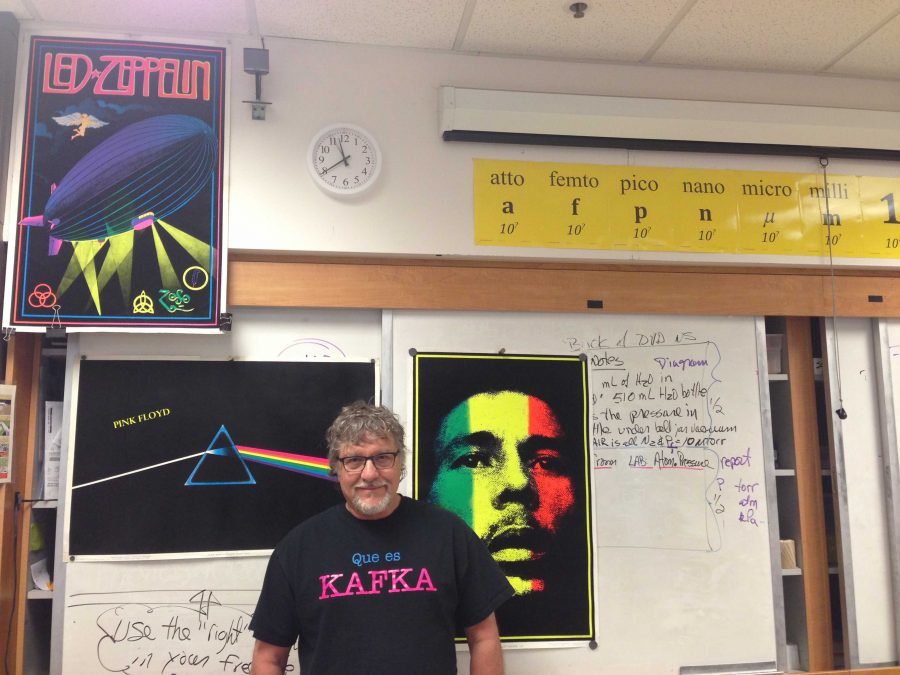 McCrystal stands in front of his posters, which depict Bob Marley, Led Zeppelin and Pink Floyd, some non-bands he listens to along with jazz. Photo by Joyce Varma.

McCrystal stands in front of his posters, which depict Bob Marley, Led Zeppelin and Pink Floyd, some non-bands he listens to along with jazz. Photo by Joyce Varma.

I like jazz bands and I listen to a lot of that. I started doing that in the early 70s, working in the darkroom when I first learned the new photography. That’s why I started listening to late night jazz. I listened to all the 60s music, and once in a while I play that for the kids, too. I have a mix of all the stuff from the late 60s, the Rolling Stones and Jimi Hendrix.

2. How do kids react to you playing all this music all the time during class?

There are different kinds of jazz. Some of it is real modern like Charlie Parker, that’s real discordant and it’s not my favorite because it’s not really mellow. I like some mellow tenor saxophones so stuff I play is not really classical, but it’s pretty friendly and it calms the students down.  Some are interested and they go out and they listen to jazz afterwards. And sometimes I play the blues, but not as much because it’s harder to work when the blues songs are going.

3. Why do you have Pink Floyd and Led Zeppelin posters hanging in your classroom?

Well, Pink Floyd is not my favorite although I have it on the wall. In chemistry, we do atomic and nuclear arts in the fall but we use energy level diagrams, which explain the fluorescence of phosphorus. [The Pink Floyd and Led Zeppelin posters] are two cool blacklight posters that fluoresce. The Pink Floyd poster shows Newton’s law of dispersion. It’s one of the ten great experiments of all time. I picked the Led Zeppelin poster because it’s got a great fluorescent effect. Kids ask me if I listen to Led Zeppelin and I say, “Yeah, when they were a new band.” But then do I listen to them now? No. Usually I listen to old Rolling Stones.

4. Why do you play music during class?

I play in the morning when I get started. I play it in class when there are labs. I tried one year to let the students pick the music but it became too much of a competition. Not everyone likes everybody else’s personal music. There are times in the labs, and the labs got more moving around, I’ll play Bob Marley. The kids like that. He’s past their time but sort of timeless. I’ve also got a 60s mix that I’ve put together that’s like my memories of the sixties.

5. Does your music evoke memories?

Oh yeah. Living on the beach, going to school, struggling in physical chemistry and getting together with groups of people. It was nice to listen to music when I used to study quantum mechanics and gas kinetics which were two of the hardest classes I took. It’s interesting because they say that the key to the brain is smell and there’s been a lot of research done on it. But music is also, I think, a connector like that. Visuals are really good, but smells evoke deep memory pathways and I think that music does too.

I don’t like – I call it elevator jazz. It’s a little too mellow. There are some guys out there that do it like Kenny G and it drives me crazy. I like stuff that I can relax to and read to. I live up in the mountains so I’ll take some time to sit out and read, but it’s usually mellower jazz. I like vocals, like with Billie Holiday.

I’ve got a huge iTunes library where I collect, catalog and do librarian stuff and then I make my own mixes. I’ve got a selection of fourteen different mixes of “Body and Soul.” which is an old jazz standard. So there are standards, which I like when they’re done in a certain way. Tony Bennett sings in it Tony Bennett is okay, but I don’t really care for him that much. There are people that do instrumental standards and that’s why I collect those and mix them together.

7. What is your take on modern music? Do you find new stuff or do you stick to classics?

Once a while I’ll buy a song but they don’t pop. And pop music doesn’t resonate with me very well. I don’t do hip hop and rap except Eminem and Encore. I just ordered three more of his albums. And there’s something about Encore that’s really rank and explicit but it is such a creative and interesting mix of beats and lyrics to it and my wife likes it too. We don’t listen to that stuff all the time. So once in awhile, something will jump and catch my attention.

8. What’s your most favorite song?

That’s a tough one. Well, I’ll have to say right now, this ‘Body and Soul’ collection that I put together is so good, I’d have to say that’s one of my favorites. When I go through my music library, I’ve got 180 gigabytes on my hard drive. And I’d have to say ‘Somewhere Over the Rainbow.’ When I first met my wife, it was a song I grew up with and I was able to whistle it, so she remembers that.