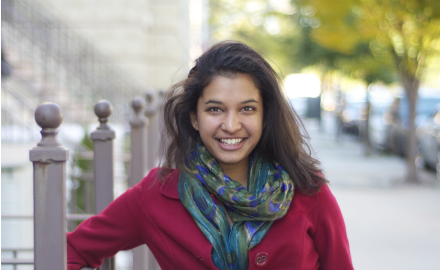 Class of 2009 alumna Neesha A. Tambe looks to be your conventionally successful college senior: Currently majoring in sociology at Georgetown University, she is nearing graduation and already has job interviews lined up.

However, her college experience has been anything but conventional.

Instead of a four-year college after high school, Tambe studied at De Anza College for a couple of  years before transferring to Georgetown.

“And that,” she said, “was the best decision of my life.”

It wasn’t always smooth sailing at either school, though. At Georgetown, Tambe experienced a steep learning curve in terms of living on her own during the first few months. Among other things, she dealt with a month-long mice infestation after leaving food out one night and even nearly started a fire while doing her laundry.

In addition, Tambe initially struggled with making the mental leap from hometown Cupertino to Washington D.C.

“There’s a time where you’re like, ‘Oh my God, if I die, today, it’s going to take somebody some time to find out,’” Tambe said. “How you deal with your life, what you do in the future, that’s all on you the second you step outside of the house. You can’t depend on anybody else. And that self-reliance, that frameshift was very hard.”

An equally significant frameshift took place during her two years at De Anza, where Tambe realized she didn’t need to follow the same formulaic route as everyone else.

While at De Anza, a close friend told her: “Be willing to be uncomfortable. Be comfortable being uncomfortable. It’s a small price to pay for living the dream.” Tambe lives by those words today.

“The best moments of your life happen when you push yourself and when you stop being like, ‘Okay, I’m going to do this status quo,’” she said. “When you transfer to another school or you take some time off — that’s when you’re like, ‘Oh my God, there’s an entire world out there.’”

Not conforming to the regular college route has led Tambe to opportunities like writing something that was read on the floor of the House of Representatives and even teaching English in Romania.

Tambe recalls that her mother once told her she was nervous when Tambe didn’t have a 4.0 GPA and decided to attend De Anza. According to her mother, sometimes people fall into a hole there.

“But I put my effort into my passion, and I became successful at it,” she said. “And that’s when my mom was like, ‘I was nervous, but now I’m not.’”

Tambe’s not sure which specific careers she plans to pursue, but she does plan on following her passions — which lie in finding ways to impact her community positively.

Whatever happens, she knows that she’s learned the practical skills to take care of herself and the mental discipline to succeed in whichever field she chooses.

“Living the dream, it can happen. But it can’t happen if you just do what you think you should be doing,” she said. “It’s about finding that passion, finding that fire inside of yourself — that you can wake up every day, and say, ‘I’m interested in that.’”