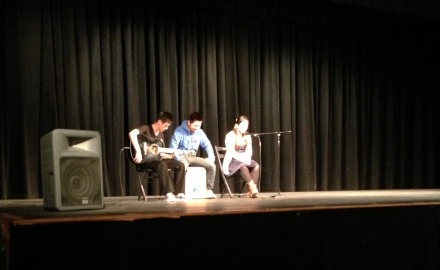 On Feb. 1, MVHS’ FBLA chapter, along with those of Cupertino, Homestead and Lynbrook High Schools, participated in the first ever Baby Benefit Bash, which took place in the HHS Auditorium. The event, which was organized by the MVHS and HHS chapters, featured singing, dancing, and instrumental talents from each of the different schools. The acts representing MVHS included dancing by the Bhangra team, Reckless Hip Hop Dance Crew and singing by senior Puja Iyer.

Bhangra performs the closing act of the night.

Admission was $5 per person, and all proceeds were donated to March of Dimes. FBLA has supported the organization for many years in helping premature babies. MVHS FBLA president senior Barak Gila, who created the name of the event and helped to coordinate it, believed the Baby Benefit Bash was a great start to what may become an annual FBLA event.

“I was really happy that all the FBLA chapters in FUHSD were able to come together and contribute to a great cause,” he said.