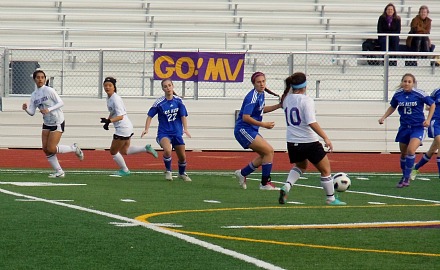 Junior Angela Inn makes her way over to Los Altos High School's territory, only to be met with opposition from LAHS's powerful defense on Jan. 11. In situations like this, the Lady Mats failed to maintain possession of the ball, which in part prevented MVHS from scoring and led to their 0-2 loss. Photo by Soumya Kurnool.

The points (or lack of thereof) on the scoreboard of the Jan. 11 game against Los Altos High School did not seem to be representative of the team that was riding high off of making CCS the past few years. In spite of this being their third straight game without a single goal, the Lady Mats looked as strong as they ever had — with aggressive drives, improved ball control and startling speed at times. The recurrent problems of confusion and an inability to predict and block LAHS, however, ultimately prevented the team from getting much-needed points on the board.

In the first minutes of the game, audience members had reason to be optimistic that MVHS would break out of their two game scoreless streak. The Lady Mats took charge on the offensive early, using their speed to get close to the goal and remain in LAHS territory. MVHS also had more possession at first, as players made effective tackles to regain control of lost balls from LAHS.

However, in the 13th minute of the game, an LAHS player made her way over to the goal area, and with MVHS defenders clustered together around a group of LAHS players, one side of the goal was left open with only goalie senior Gal Haroush to defend it. As Haroush dived, the ball rolled past her for an LAHS goal.

“Too easy,” head coach Alan Kute yelled from the sideline, shaking his head.

The Lady Mats were not slow to respond, however. In the 15th minute of the game, senior Lauren Hansen assisted junior Angela Inn for a close scoring opportunity, but was blocked by an LAHS defender. LAHS seemed to up their ante by answering with a drive up the right side of the field (a pattern that would be repeated in the majority of their subsequent goal attempts), which resulted in a corner kick for them. Their drive was ended with a save by Haroush.

MVHS seemed to be in confusion throughout the game, as during the throw-in in the 39th minute, when senior Hayley Chan’s hesitation in throwing resulted the ball in going back to LAHS. Furthermore, under pressure, the Lady Mats had a tendency to give the ball away, kicking straight to LAHS defenders. MVHS also struggled to predict LAHS and was unable to block the targeted players during LAHS throw-ins, as LAHS was able to during MVHS throw-ins. LAHS had MVHS’ number, but it was clear that for this game, MVHS didn’t have LAHS’.

Consequently, it was not much of a surprise that in the 40th minute of the game, LAHS managed to get another kick into the corner of the goal to score their second goal of the game. Another close LAHS goal attempt followed, a corner kick that went soaring above the goal right before the end of the first half.

During halftime, coaches and players alike agreed that the game was not totally out of reach if MVHS could gain momentum and score within the critical first ten minutes of the second half.

“We have got to be hungry for a shot,” Kute said. “We have to try aggressively to get into the box.”

Although the Lady Mats were unable to score in the first ten minutes, they did come close with a swift drive with assists by seniors Malvika Mecker and Casey Kute and the final shot by senior Mimi Akaogi, which was caught by the LAHS goalie. MVHS’ solid footwork was promising, as was their ball control during the beginning of the second half, both of which appeared to flag for both teams as the second half of the game dragged on and as more MVHS goal attempts fell straight into the goalie’s hands. The Lady Mats’ were predictable and thus relatively easy to block in trying to get to the goal box, which may have been a key factor behind their three straight games without goals.

Yet even their lack of points has not stopped MVHS from being optimistic and calling their own performance solid.

“We played really well which is really frustrating that we can’t get results because we had a game on Wednesday [at Saratoga High School] and didn’t play very well. We lost 2-0. So it’s the same score. But this game, we came out strong and were really focusing during warm-ups,” Haroush said.

Alan Kute identified shooting as a problem in particular.

“I thought we played pretty hard, pretty well,” he said. “We just need some more people to hold it up front and take more shots.”

Haroush has hopes that the team bonding outing at Koinonia Conference Grounds near Watsonville, CA on Jan. 12 will help the team get back into the swing of scoring in their next game. During their 9 a.m. to 5 p.m. trip, the Lady Mats took the “Cliffhanger Course” where they climbed 60 feet up a tree and then ziplined off.

Contrary to the team’s hopes, the scoreless streak has increased to four games, as MVHS lost 0-3 to Mountain View High School on Jan. 14.

The Lady Mats play their next game at home on Friday, Jan. 18 against Homestead High School.