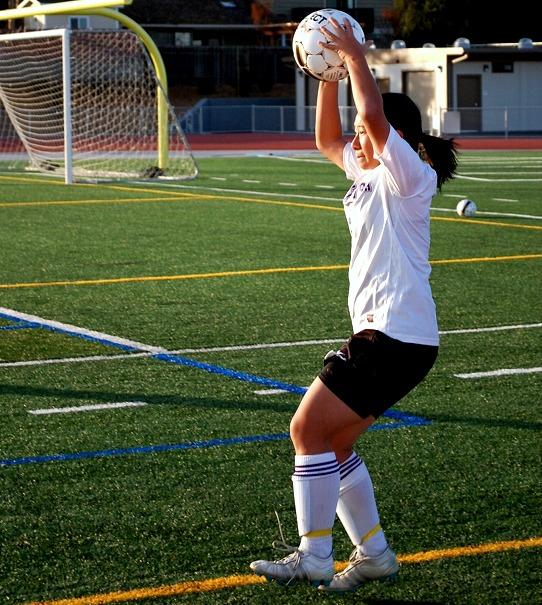 Hayley Chan throws the ball in to a teammate. The Matadors won the match 1-0. Photo by Karen Feng.

The girls soccer team won with a score of 1-0 against Sobrato High School on Dec. 8 at home due to dominant possession of the ball. The Matadors were also short of players, having only 14 instead of the regular 19 due to sickness, injury and schedule conflicts on the Saturday morning match.

The game began with MVHS control of the ball. The Sobrato Bulldogs, though, intercepted a few passes and tried to move the ball to score. Throughout the match, the SHS bench only consisted of a few coaches and one player, and no subs were made throughout the match from their side. MVHS, with three subs subbed in many of their players and were able to dominate the game. The first half remained scoreless. The SHS players looked much more fatigued at the end of the match.

“The gameplan was to get everyone time for the girls who hadn’t played as much in the past, to see what they could contribute and they did a good job,” head coach Alan Kute said. “They had one forward who scored a lot of points for them, so we kept an eye on her, but otherwise we defended well and took advantage of our chances.”

The second half had a quicker pace as both teams tried to drive the ball upfield to score. Many of the starters for MVHS, who took a break in the first half, were back in the game with fresh legs. Kute continued to sub players in and out as MV tried new lineups to get a better feel of the field.

In the 47th minute, a strong cross from sophomore Janaye Sakkas made its way to the middle of the box and senior Casey Kute headed the ball into the goal. The goalie was able to touch it, but the the ball still went into the goal for the first and only score of the game.

“It was a nice floated ball in, and the girl who was marking me stepped in front and thought she could win it but she misjudged it and it came straight to my head,” Casey said. “And I just hit it forward and the goalie tried to get it, but she missed.”

The Matadors did allow some shots on their own goal which were blocked by senior Gal Haroush. Both attempts on goal were during the 50th minute. But after that, the Bulldogs were unable to penetrate into the Matador defense.

The Matadors held on to a 1-0 victory. They are still undefeated, 4-0-2, and are currently on a four game winning streak.

The Matadors next home match is on Dec. 11 against Branham High School.