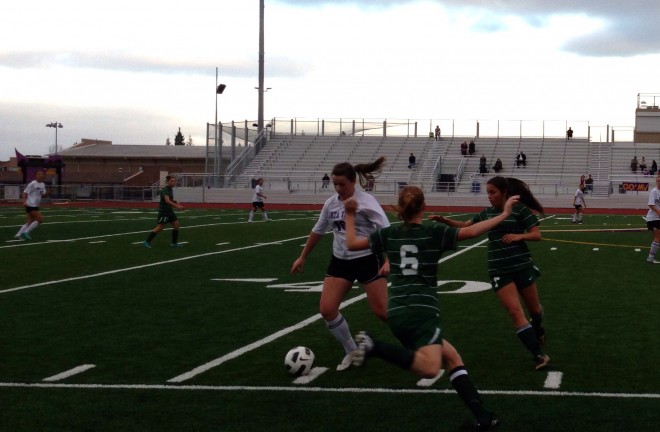 The Lady Mats played Leigh High School on Dec. 6 and secured another home victory with a final score of 3-0. Improved communication and anticipation of the ball helped MVHS score three goals and intercept countless passes from the Longhorns. The Matadors scored their first goal near the middle of the first half and never took their foot off the pedal.

“We talked more and I think we had quicker speed than them,” junior Kelly Ruckstuhl said. “We did well overall.”

Despite the rain from the previous day, players maintained good control, and both teams were able to make complete passes. However, the Lady Mats had problems on offense. When they dribbled down the center in the first half, they were caught off guard multiple times by LHS’ deep sweeper, which met them head-on and stole the ball.

The Matadors started the first half more aggressively than they had in the last game against Fremont on Dec. 4. In the fourth minute, junior Amelia Strom ran up the sideline and passed to sophomore Janaye Sakkas. One-on-one with the goalkeeper, Sakkas took a shot, but the ball hit the crossbar. There were three more attempts on goals in the first half. Seniors Lauren Hansen and Haley Chan also received good looks within the first 10 minutes of the game, but were blocked by the LHS goalkeeper.

In the 27th minute, the Lady Mats benefitted from Chan’s persistence when they were awarded a penalty kick off a handball. Chan took the penalty kick to put MVHS ahead 1-0 about midway through the first half. By this time, the Longhorns had slower paces, reflecting their growing fatigue.

However, the Longhorns also had a few close attempts within the first half. In the 38th minute, LHS attempted to score with a shot from out wide, but goalie senior Gal Haroush blocked the shot.

Both teams increased communication and their intensity of play during the second half. For the first few minutes of the second half, MVHS was forced to play in their defensive third. However, the Lady Mats’ effective backline allowed the offense to gain momentum for most of the second half. In spite of LHS’ renewed awareness and anticipation of the ball down the stretch, senior Casey Kute scored the second goal of the game in the 44th minute.

“For [LHS], they only had one fast player that was number 11 who was their only strong defender, but for us it’s a lot more balanced, so we were able to handle passing and shooting the ball,” sophomore Bella Zhang said.

During the second half, the Lady Matadors intercepted more passes and were on the offensive more regularly than they were during the first half. At around the 78 minute mark, senior Mimi Akaogi dribbled at an angle towards the center from the left to score the third and final goal of the game.

Unlike the previous games of the season, the Matadors started out with more energy and aggression, allowing them to early on. Increased communication also helped the Lady Mats make complete and connected passes. They steadily gained two more goals throughout the second half, and ended the game much more convincingly than in previous games.

“We played stronger than we had in the past, and we deserved [the win].” Kute said.

The Matadors’ next game will be against Branham High School at home on Dec. 11 at 3:15 a.m.