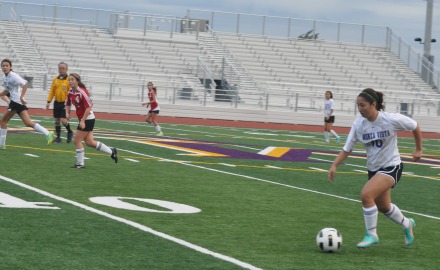 Though the score stayed at 0-0 for the majority of the game, the Matadors claimed the second win of the preseason against Fremont High School on Dec. 4. In a battle reminiscent of the last game against Prospect High School on Nov. 30, both sides struggled to push ahead throughout all of the first half and most of the second half. Junior Angie Inn ended the scoring drought at the end of the game, leading to the Matadors’ victory with a score of 1-0.

Towards the beginning, most of the play took place in the middle of the field as both teams fought for the advantage. At one point, FHS slowly gained ground due to a brief lapse in MV’s defense. The corner of the field was left open, leaving a wide window for FHS offense’s first real shot for a goal. Nevertheless, senior Gal Haroush saved the shot and two others during the first half to keep the score at 0-0.

But due to the relative lack of communication on the Lady Mats’ part, sustained possession of the ball was rare, and most runs, including senior Mimi Akaogi’s multiple drives, ended in an out of bounds shot or a takeawayy.

“Where’s our possession?” head coach Alan Kute said from the sidelines. “We give it away every time!”

In a close shot, junior Lauren Hanson drove down to the FHS field, but the keeper prevented a goal going towards the center of the net. Another attempt to score involved sophomore Janaye Sakkas, who rushed her shot even though Hanson had the goalie guarded, skewing the aim. In an attempt to dive for the ball, the FHS goalie injured herself and was replaced by an FHS defender.

With newfound energy, the Lady Mats closed in for their goal, tightly guarding the goalie with senior Christine Wang blocking from the front. But due to continued defense by FHS, there was no attempt at a shot for a goal, though senior Hayley Chan and Hanson kept the ball in the Firebirds’ territory.

In the last few minutes of the game, the Lady Mats’ continued pace proved advantageous. After senior Celeste Kim threw a ball in from the right side, senior Casey Kute barely tipped the ball forward, where Inn found an opening to shoot the ball off her first touch. The FHS goalie appeared to be worn down from the aggression of the Matadors and miscalculated both her jump’s direction and timing, and Inn’s ball rolled smoothly into the bottom left corner of the goal.

“If we play because we want to play, and play hard, we’ll do pretty well,” Coach Kute said. “It’s just a matter of them really saying, ‘when we step on the field, we want to do it.'”

With only a minute to spare, the rest of the game was played on MV‘s side of the field, but the Matadors were able to hold off most shots and a solid save by Haroush allowed them to emerge victorious.

“[During] the second half we were talking a lot more. People on the bench were encouraging, and you could definitely tell that everyone’s intensity was lifted a lot,” Haroush said.

Much like the Nov. 30 game against Prospect High School, the Lady Mats scored the winning point just minutes before the end of the game. Though the rest of the game was a back-and-forth exchange in the middle of the field, in the end the girls secured their second win when adrenaline and communication was at its peak.

“That’s kind of a theme this year. I think in the first half — the last game, too — we were really slow, and at halftime we make sure we’re gonna do better,” said Inn. “[In] the second half, we’re rallied up and in the end, everyone’s like ‘Okay, this is our last chance, we got to get it in,’ and then everyone goes a lot harder.”

The Matadors’ next game will be against Leigh High School at home on Dec. 6 at 3:15 p.m.