Franish Mashup incorporates Spanish and French in one social 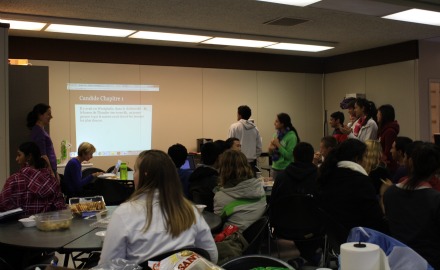 French students had their first taste of Spanish culture as they walked through the doors of the Staff Lounge to Spanish singer Juanes’ “La Camisa Negra”.

“[French Honor Society Treasurer Rohan Prakash] actually approached me and he talked to me about it,” SHS President Emily Vokach-Brodsky said. “We thought it’d be a cool idea to have two cultures come together and have the members be able to experience that.”

“[Franish Mashup is] an activity that can incorporate both language and culture, and at the same time serve the purpose of an honor society,” Zou said.

Franish Mashup began with immersion in the foods of each culture, brought by members of both honor societies. Spanish students

enthusiastically devoured macarons, a delicate French dessert, and French students poured themselves cups full of milky horchata, a Spanish drink made of rice. There were also croissants, burritos, petite palmiers, taquitos and more. The holiday cookies were neither Spanish or French, but were welcomed by everyone nonetheless.

After stomachs were full, each organization was challenged to read a passage in the other’s language.

“When people read a different language that they weren’t familiar with, it was pretty funny and interesting,” said French student junior Ismaeel Sheriff. “Spanish is really easy to pronounce, and French is way harder.”

Although pronunciation between the two languages is vastly different, both Spanish and French have roots in Latin. The organizations acknowledged this by allowing their students to compete in translating the others’ language by taking note of the similarities in spelling.

For most members, it seemed to be working. As the social came to a close, Sheriff acknowledged his newfound appreciation for the Spanish language, but suggested that he may stick to learning about just French for the time being.

“We already learn enough culture stuff in French, so that’s enough for me,” he said.