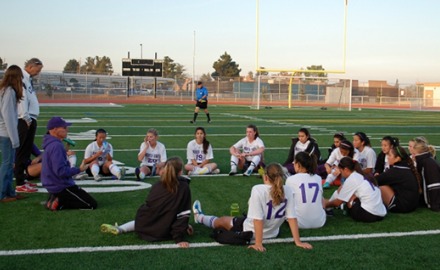 Senior Celeste Kim dribbles past an SVHS defender. Her fast footwork brought the ball into SVHS territory during the preseason opener on Nov. 26. Photo by Karen Feng.

In their first preseason game, the Lady Matadors opened the season with a tie against Scotts Valley High School — a competitive team that has often gone to the Santa Cruz Coast Athletic League finals and won Division III. This year’s team has big shoes to fill, as the Lady Matadors ended last season with a close defeat against Carlton High School in the CCS quarterfinals. According to coach Alan Kute, the team’s top three scorers graduated, putting pressure on this year’s team to step up to the occasion, as a large part of the team — 10 of the 19 total players — have just moved up from junior varsity. Three of the four defenders and the goalie are returning members, while the offense is more uncharted.

“We’re trying to figure out even where the players should go,” Kute said. “So we’re putting them out there, and some of them are not in positions they’re comfortable with, but they’re learning to communicate with each other, learning to call plays on the field … that will come [in time].”

As a result, the game ended up being a bit of trial and error, laden with communication problems — as players were not on the same page for several crucial plays — that were fortunately overcome in the second half. However, there were several missed opportunities to drive the ball into SVHS territory. The players hesitated before passing, sometimes losing possession.

The Scotts Valley girls scored their first and only goal with a swift offensive drive, helped in part by their quick footwork and deep throw-ins that got the ball

The Lady Matadors huddle to assess their performance during halftime and remedy communication issues. They were able to spring back from a lackluster first half by scoring within the first few minutes of the second half and tying the game 1-1 in the preseason opener. Photo by Karen Feng.

moving rapidly into the Matadors’ goal zone and past the Matador goalie senior Gal Haroush.

After the goal was scored, MVHS struggled to drive the ball aggressively, as players were sometimes caught unaware looking the wrong way, losing time that could have been spent moving the ball forward into SVHS’s territory.

The rest of the half was marked by several close scoring chances by MVHS (video below), many of which failed because of weak shots in front of the goal that were easily saved by the SVHS keeper. SVHS, on the

Leading an aggressive offensive drive, senior Mimi Akiogi dribbles switfly to avoid SVHS defenders in the preseason opener game. The Lady Matadors were more energized in the second half and staged many more goal attempts than in the first half. Photo by Karen Feng.

other hand, played slower and could not maintain possession of the ball, unable to really pose a threat to the Lady Mats until the last few seconds of the game, when SVHS took a shot that was blocked and rebounded off Haroush. The ball rolled in front of an empty net but was caught at the last second.

Despite the fact that the game was a bit too close for comfort, Kute was impressed.

“We competed well,” he said. “We had good ideas of what we want to do [for the future].”

With their first game as a tie, the Lady Mats seek to patch up their communication problems to play more aggressively, as they did in their second half of the game, in order to achieve their goal of getting to League Finals and then CCS, as they did last year.