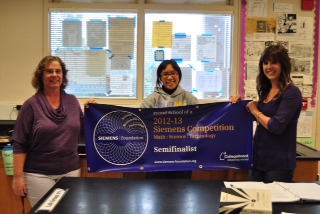 Science teacher Elizabeth McCracken’s sixth period AP Chemistry class was interrupted by staff and administration on Nov. 16. The motive behind this ensemble seemed to consist of a blue banner — more specifically, the newest Regional Siemens Math, Science and Technology Science Fair banner — which reiterated what the administrators at the gathering announced: senior Kasie Wong had finished as a semi-finalist in the competition this year.

Although Wong was notified by Siemens about a month ago regarding her success in the competition, the school decided to keep the information private until she was formally congratulated. MVHS has, after all, had an active participation in this particular science fair. Class of 2012 alumnus Angela Zhang was the Siemens National Competition winner just last year.

Wong first contemplated entering the science fair during the fall of her junior year, but chose not to at the time due to other commitments. In the spring, however, Wong reconsidered, thinking  she would have a lighter course load her senior year. But what sealed the deal was her acceptance to the Stanford Institutes of Medicine Summer Research Program.

“I decided, since I’m already going to be in a research institute working, why not use that for the science fair?” Wong said. “It’s what a lot of people do because then you can learn about the process, but you don’t have to worry much about the bulk of the research because that’ll be done over the summer.”

During the eight-week program, Wong  worked under the guidance of Stanford professors at an immunology lab at the Veterans Affairs hospital in Palo Alto. There, she was involved in multiple projects ranging in focus from cancer cells to multiple sclerosis to peanut allergies.

“I got interested in it because one of the other researchers was working [with this protein], and he explained it to the summer students while he was dissecting a mouse,” Wong said. “So that kind of caught my attention.”

According to Wong, the protein causes immune cells to multiply rapidly. These cells then recognize foreign antigens and alert the rest of the immune system as to whether it should attack or tolerate these unfamiliar substances.

In the 14-page research paper she submitted to Siemens, Wong described her interest in utilizing the FLT3LG protein to treat autoimmune and allergic conditions by modeling the effects of its usage as a cure in various models, such as bacterial, allergic and inflammatory.

Wong credits her success in the competition to the help she received from various mentors, such as Principal Investigator Senior Research Scientist Brian A. Zabel of Stanford University, who helped Wong become acquainted with the steps and technique behind researching.

“There were many other student researchers who helped me too,” Wong said. “Basically, my whole lab helped me.”

However, science teacher Renee Fallon, who taught biology to Wong her freshman and junior years, shares a different side to the story. To Fallon, such collaboration should not take credit away from the researcher.

“No scientist sits in a laboratory and works by herself,” Fallon said. “Science is naturally a team effort.”

Fallon, who helped Wong edit her paper before she submitted it to the fair, claims that the biggest changes she suggested had to do with the lack of self-representation in Wong’s writing, adding that Wong is an incredibly modest student.

“It’s really [Wong]’s award,” Fallon said. “It’s great that the teachers and mentors are being recognized, but the award is hers.”