‘Twelve million jobs’ not a chance to reconsider Romney 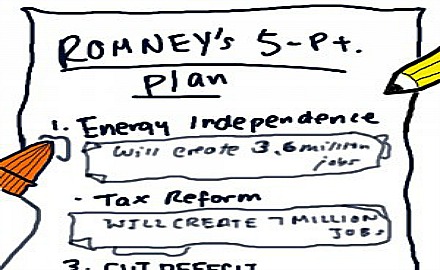 Twelve million jobs. It is as much a favorite phrase to presidential candidate Mitt Romney as “regular folks” is to President Barack Obama. Having finally been able to reveal a plan to the public, and thus clarifying the proposed solutions to currently important issues, Romney has breathed new vitality and substance into his campaign. This newly unveiled “five point plan” calls for increasing energy independence, cutting the federal deficit by reducing the size of the government and increasing the growth of small businesses across the country. And at the heart of this master plan: the promise to create 12 million jobs within the next four years.

Now that people have had the chance to judge Romney aside from his campaign faux pas (see: the London Olympics gaffe and his binders full of women), it has become clear that after the announcement of this plan and his success in the first debate, the Romney campaign is gaining momentum. According to a recent Gallup poll, Romney is now ahead of Obama among registered voters, capturing 50 percent of the popular vote, as compared to President Obama’s 46 percent.

Nevertheless, as people begin to reconsider Romney and his five point plan, it turns out his plan to create 12 million jobs is nothing more than a collection of manipulated data, as revealed by Washington Post fact checker, Glenn Kessler.

The five point plan will supposedly boost the middle class with a tax reform plan that will lower taxes for the lower middle class and small businesses, purportedly thereby lowering the unemployment rate.

All of this will be done within the next four years.

The “white paper” on the Romney campaign website which spells out the five point plan in detail, also cites a study by John Diamond of Rice University that states that “the Romney tax reforms will raise real GDP by about 0.6 percent per year over a decade and increase employment in the long run (above the level possible in a more robust cyclical recovery) by 7 million jobs.”

However, what Diamond’s report actually says is that “the reform would, if passed immediately, increase GDP… over the next decade, while creating 6.8 million jobs.” Although the study does concede that Romney’s plan does increase investments, consumption and employment, it is over a course of 10 years — not the four years Romney claims.

Finally, Romney plans to create two million jobs by preventing Chinese businesses from violating U.S. intellectual property rights. This part of the plan is derived from the 2011 International Trade Commission report which suggests that 2.1 million jobs can be created if U.S. businesses were protected in the Chinese market.

Although this process to create jobs is supported truthfully by the report, the process itself is hardly a feasible solution. Despite the fact that Chinese businesses currently cost U.S. business millions of dollars in copyright infringement, there is another problem: in a country where pirated movies, pirated music and fake Louis Vuittons are infringing upon copyright rights without any restrictions regarding licenses, there is little the Chinese government, let alone the U.S. government, can do to regulate this kind of market.

It is a shame that Romney’s campaign is finally gaining a lead in the polls with a plan that has glaring flaws hidden beneath the eight-page “white paper.” His job creation record in Massachusetts isn’t very impressive either. According to the Baltimore Sun, there was less than 1.3 percent growth during Romney’s term from 2003 to 2007 — making the state the third weakest for private sector job growth.

Then there’s Obama’s job creation plan. Under Obama, who inherited a vastly more decrepit nationwide economy, as opposed to Romney’s experience handling a statewide economy, the nation experienced a 1.6 percent growth in the national private sector or 1.9 million jobs according to the Baltimore Sun. Perhaps that is minimal improvement for Obama, but if Romney, founder of the private equity investment firm Bain Capital, could not lower his state’s unemployment rate at a time when the national job growth rate was at 6 percent, how is he going to lower the national unemployment rate at its current state?

This plan is not one of the former governor’s small goofs. It is his latest attempt to reel in voters before election day. And it’s a shameful one. It is important to keep in mind who exactly we are sending to the White House and what values that individual will bring along to the administration. The same goes for people who cannot vote yet, who could easily jump on the same political bandwagon as their parents without serious consideration of who they are actually supporting. Whether the individual is a republican, a democrat or a mere high school student, the vote must be based on genuine evidence. A four point lead in the polls is not a reason to reconsider a candidate who creates a mishmash of information to feed to voters and nonvoters alike. For the sake of the future of this nation, look at the facts, not just what’s on the paper.