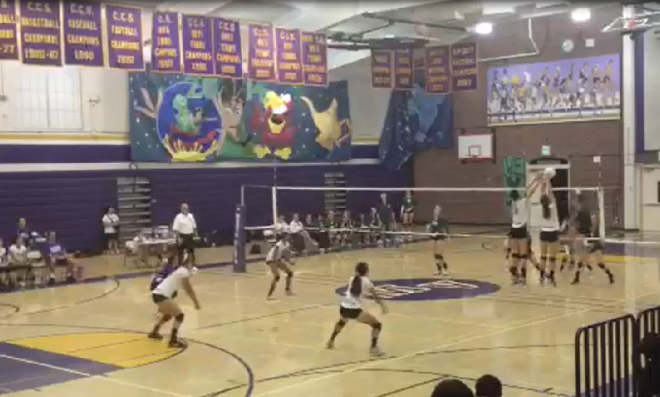 The defense of the MVHS girls volleyball team broke down once again against Palo Alto High School on Oct. 16 due to its inconsistent offense.

The cycle goes something like this: The Matadors make a good defensive play, but their offense is unable to put the ball away which lets the opposing team attack. Against the Vikings, the MVHS offense was unable to follow up on successful defensive plays, leading to a 0-3 defeat.

“I was a little disappointed,” senior Livia Song said. “I feel like we could have done better. Both offense and defense could have been better. I feel like we should work on front row and back row communication.”

MVHS dug themselves in a 5-11 hole the first set. Tough serves from PAHS senior Shelby Knowles prevented any early points for the Matadors.The Matadors played good defense for a few points, but offensive plays did not lead to any points. Because of an offensive slump, head coach Colin Anderson called a timeout when the team was behind 10-19. Thereafter, MVHS’ blocking defense was able to slow down the attacked ball to let the defenders pass. The Vikings did not get many kills that hit the ground without a MVHS player touching it first. Despite the defensive comeback, the Matadors lost 11-25.

“Palo Alto [High School] is solid,” Anderson said. “They don’t make a lot of mistakes. I think I can count three mistakes that they made that whole game.”

The girls started with two points in the second set before giving up nine consecutive points because of lack of execution on offense. However, the Matadors were able to chip into the lead by tipping the ball 6-10. Junior Beverly Yu played offense consistently , keeping the Viking defense off balance. MVHS gained more momentum and forced PAHS to call a timeout with a score of 10-12. Even after the timeout, MVHS came out playing with confidence, including senior Allison Yu, who went on a serving run to give MVHS a 13-12 lead. However, the Matadors lost their lead and the set, giving up 13 points while earning only four. The set ended with a score of 25-17.

“For us to get points, we really need to put the ball away,” Anderson said. “The other team played great defense; did a lot of really good stuff. You really have to earn your points [against the Vikings] and we didn’t do that.”

The Matadors started the third set with a 5-1 lead by getting a few blocks and solid blocking defense, forcing the Vikings to call a timeout. After the timeout, PAHS quickly cut into the MVHS lead, forcing Anderson to call a timeout with MV down 6-7. The teams went back and forth winning rallies to make the score 12-13 with PAHS leading. However, the Vikings went on a few runs and defeated MVHS 25-14.

The Matadors’ overall record is 14-11, while their league record is 3-7. They are 1-3 at home, with their sole win against Lynbrook.

The Matadors‘ next home game is on Oct. 23 against Los Altos High School.