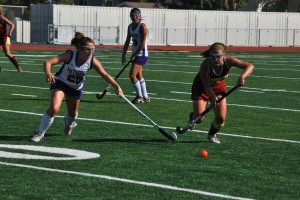 On Sept. 28, the MVHS field hockey team played CHS for the first time on the MVHS field. After falling behind in the early minutes of their last two home games, the Matadors fought to keep the Pioneers from scoring by breaking up passes and calling out their locations. MVHS matched CHS blow for blow, but eventually gave in. CHS penetrated the MVHS defense, and a MVHS foul set up a penalty shot for CHS.

Matadors goalie senior Megan Jones was unable to block the penalty shot from and the Matadors were down 1-0. Giving up the first goal to the opposing team has been a recurring theme in the Matadors previous games.

“When we start off every game, I think we’re like a little slow,” Jones said.

CHS continued to dominate time of possession for a majority in the first half, keeping the pressure on Jones. The defense had to focus on clearing the ball, unable to create their own offensive plays and connect their passes outside their own defensive zone.

As the half wore on, MVHS attempted to regroup, and planned for a comeback in the upcoming half with head Coach Denise Eachus instructing them on the improvements they needed to make.

The Matadors began the second half strong, getting a short corner within the first few minutes that allowed many opportunities for the offense to score. Along with this, their defense picked up with better ball control and passing.

“We were passing more,” sophomore Janaye Sakkas said . “The last ten minutes in the second half was more of our game, whereas we started off a little slower.”
After a quick penalty, senior Katie Byrne passed the ball towards the side, hoping for a better view of the goal. Senior Caroline Lei received the pass and sprinted down the sideline. However, CHS fought to regain control, by pushing Lei until she lost possession. CHS, however, received a green penalty card, giving the ball back over into MVHS possession.

MVHS seemed to finally find their groove after several successful saves by Jones later in the game. With defenders junior Amanda Fong, senior Cindy Jung and sophomore Katie Sommers playing together and protecting the goal, CHS was unable to score any goals in the second half. The MVHS defenders took a keen eye to intercepting CHS passes, as well as aiming fastbreak passes better to keep the ball in CHS territory.

With multiple fast breaks from both sides of the court, it seemed that MVHS had a good possibility of scoring another goal. Yet, as the end of the second half neared without any results, they were unable to come out of their first official home game with a win.

At this point in the season, the Matadors have struggled to get into a rhythm. Often times the team has lacked good communication and cohesive play in the first half, and the forwards can’t score points for lack of support from the midfielders. However, MVHS has transformed in the second half in many games, showing much better passing and poise. Now the Matadors need to apply their intense second half play to the beginning of the game as the team reaches mid season.

“This game we really worked together, and I think we can start winning games now,” said junior Amelia Strom.

The Matadors’ next home game will be against St. Ignatius on Oct. 8.