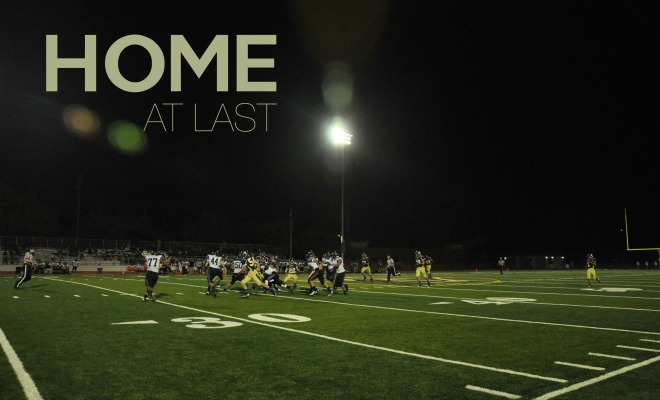 Forty-three years of waiting and finally on the night of Sept. 7, students, parents and staff gathered at MVHS for the first time to witness the grand opening of the Charles Morrill Field as well as the first-ever home varsity football game on the newly constructed turf and stadium. Bright purple and golden balloons decorated the stands, and the MV emblem on the turf was vibrant under the newly installed, bright white lights.

Principal April Scott started off the night by acknowledging all the individuals who had worked for years to obtain the field. To top off the moment, MVHS math teacher Jon Stark made a dramatic entrance flying his helicopter over the field several times and sending the crowd into a wild frenzy. The stands were packed with students, family and staff as well as alumni, all dressed in purple and gold and eager to be present at the first home game on the new field, which was completed over the summer.

To start the game, senior Peter Stern fumbled the first kick return at the 10-yard line, turning over the ball to Sequoia High School and allowing the Cherokees to score the first touchdown of the game within the first 14 seconds. The Matadors continued to struggle with defense and were unable to convert offensively throughout the first half of the game; by halftime, SHS had scored six touchdowns to put MVHS at a 0-39 deficit.

Rejuvenating their efforts in the second half, the Matador defense fought back to stop the Cherokee’s attacks after being unable to convert on their own possession. On offense, Stern and juniors Will Major and Justin Cena ran a sequence that left the Matadors 10 yards away from the goal line with five minutes remaining in the third quarter, but were unable to make it to the end zone for a touchdown.

As the game progressed into the fourth and final quarter, MVHS began to find its momentum with Stern sprinting into SHS territory to score the Matadors’ first touchdown of the night with nine minutes remaining on the clock.

That, however, would be the Matadors’ only touchdown of the night, as the large lead the Cherokees had built up in the first half would prove too big of hole to climb out of leading to an MVHS loss of 6-39.

The new field, however, drew in a large crowd to support the Matadors, and cheer, dance and band kept spirit up throughout the game as well.

“It was really awesome [that] the fans were really involved,” varsity football player Junior Zac Burke said. “It was really good to see that we had so much support regardless of the outcome of the game.”

For as long as most can remember, the MVHS campus had been unable to host a home football game, but amidst balloons, streamers, and the deafening roar of the crowd, the team — and everyone supporting it  —  finally experienced the long-awaited moment, spirits and voices high, home at last.