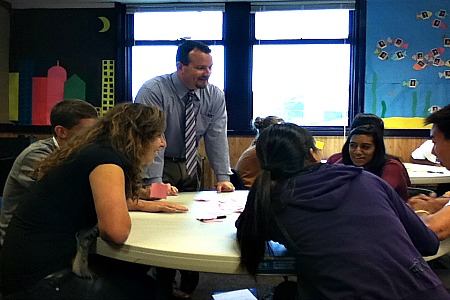 New Assistant Principal Michael Hicks has known former FHS Dean of Students Nico Flores for about four years. They became acquainted with one another at the FUHSD district meetings, where they met a few times a year to share thoughts and experiences from their respective schools with each other. This year, however, this communication of ideas not only takes places everyday — it takes place right here at MVHS.

When former Assistant Principal Dennis Plaza retired last spring, several changes in the administrative apartment had to be made. Hicks, who spent four years as a Dean of Students and an advisor of the Leadership class, replaced Plaza as the new Assistant Principal. In turn, Flores took over Hicks’ prior positions.

Stepping up to the job

According to Hicks, the Dean of Students’ and Assistant Principal’s positions assume similar responsibilities, with the only significant difference being the Dean’s focus on Student Activities and Athletics. Now as Assistant Principal, Hicks works with the smaller, more personalized programs on campus, such as AVID, special education and Challenge Day.

“I am excited about them,” Hicks said. “It’s going to give me a different perspective than my former responsibilities, such as the Leadership program, [did].”

Although being the Assistant Principal has offered Hicks new opportunities, he misses certain aspects of his previous position. As a Dean, one of Hicks’ primary responsibilities was advising the Leadership class and working directly with students.

“I certainly will miss being in a classroom on a daily basis,” Hicks said. “We all go into education to work with kids, so working with them directly is something I will definitely miss.”

Hicks believes that the transition to becoming an Assistant Principal has been generally smooth and has not affected MVHS as a whole. According to him, administration’s teamwork has also helped with the changes.

“I don’t think a huge change will resonate with the staff or student body,” Hicks said. “I think the changes will seem subtle and sometimes even invisible.”

That being said, many students felt that the Leadership class would be impacted by this change. Class of 2014 IDC Representative Alexander Pieb admits to initial qualms about whether the loss of Hicks’s direct involvement would cause repercussions to the program.

“A lot of people were worried that either the lack of experience or knowledge of the program [would cause] hindrance to the class,“ Pieb said. “But so far things have been going smoothly.”

Despite the changes in administration, Hicks has made himself available to Leadership students to allow for a seamless transition. He has received advice from Plaza and in turn passed on advice to Flores.

“When I found out that [Flores] would be joining the MV administration, I reached out to him, and now we’re communicating everyday — he asks me questions, I ask him questions,” Hicks said. “We’re just trying to emphasize the team concept.”

Becoming a part of the MVHS team

Considering the changes to the school that could result from these changes in administration, communication between Flores and Hicks has been key in this situation. That being said, the addition of Flores to the staff will not lead to any structural changes within Leadership, but regardless, Flores hopes to bring a different perspective to the class and the school as a whole.

Toward the end of the previous school year, principal April Scott was seeking out a new Dean after finalizing Hicks’ change in position, and after speaking with FHS principal Bryan Emmert, both Scott and Emmert decided that Flores would be a good fit at MVHS.

According to Flores’ fellow Dean of Students and Leadership advisor Michael White, Flores was perfect for the job because he was interested in exploring the school’s unique administrative goals.

“At this school, administration’s focus is centered around inclusion. We try to involve the [students] as much as possible,” White said. “That’s why I wanted to work here, and it’s probably what interested Flores.”

Shortly after her conversation with Emmert, Scott offered Flores the job.

“Without hesitation, I replied with an absolute yes,” Flores said. “I knew it would be a great experience for me.”

According to Flores, joining the MVHS staff will allow him to work with a type of student body he has not yet been exposed to in his career. Prior to his arrival at MVHS, Flores held administrative positions at schools that fall into the 600-800 API range, so he hopes to gain a new kind of insight from a school such as MVHS that scores in the 900s.

“It’s a population that I don’t have a lot of experience with, and that will help me grow as a professional,” Flores said.

“I think it is fun getting to know a new staff member and especially get his perspective on things,” ASB president senior Cathy Ang said. “We’ve had [Hicks] and [White] for a couple years so they already have their opinions on things. [Flores] brings new ideas.”

Advising the Leadership class has also allowed Flores to experience MVHS from yet another unique perspective. According to Flores, being a part of Leadership has been a huge learning experience. He finds the students to be bright and articulate because they are willing to voice their ideas in hopes of bettering the school.

“Most of my time over the last week or so has been spent listening to and trying to absorb as much information from them as possible in order to learn about the culture of MVHS and then finding little ways to interject my personality, thoughts and beliefs,” Flores said.

As of now, Flores feels that he has been settling in at the school quite well and credits this to the end-of-the-year administration meetings Scott invited him to attend in June as well as the helpful staff and welcoming atmosphere.

With the encouragement he has received so far, Flores feels confident in setting goals for himself during his time here at MVHS.

“I just really want to get to know MVHS … as much as I possibly can,” Flores said. “That way, I can become the best administrator that I can to help advocate for the student body.”