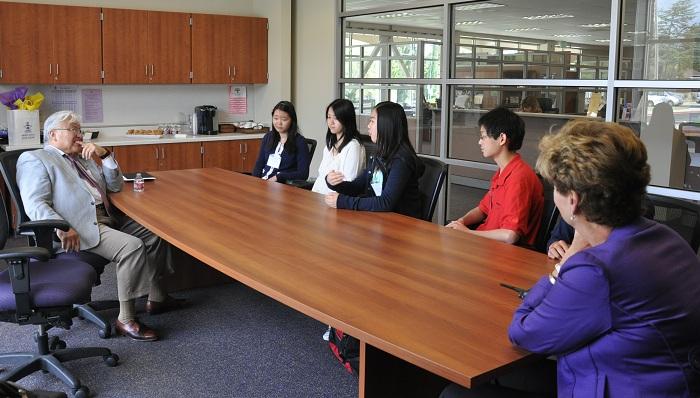 During brunch on May 25, while most students were filtering out of the Farewell Rally, senior Angela Zhang and sophomore Natalie Ng were discussing a potential cure for cancer with Congressman Mike Honda. Honda sat across a table from the two girls as Zhang described at length both the mechanism Ng had created to recognize cancer cells and the methodology she herself had developed to treat them.

“So we’re both fighting two different ends of the cancer war,” Zhang said.

Honda paused. “So you’re Buffy,” he said. “And she’s the silver bullet?”

Planting the seeds of STEM

Immediately after arriving on campus, Honda participated in a meet-and-greet in the conference room with Principal April Scott as well as five recent science fair winners. Honda spoke with the science fair participants on the content of their projects as well as the importance of the STEM field as a whole.

“I definitely think it’s very important to encourage STEM education, because everything is related to science and math,” Ng said. “And it’s important that [Honda] is encouraging schools to go into STEM.”

STEM education has, in fact, been a focus of Honda’s run as Congressman. Many portions of his Enhancing Science, Technology, Engineering, and Mathematics Education (STEM) Act were adopted for use by Congress in the America COMPETES Reauthorization of 2010. Since then, Honda has been working to enact further STEM education legislation, with the ultimate goal being, according to Honda’s website, to “bring coherence to STEM education initiatives.”

Honda also visited several of science teacher Andrew Goldenkranz’ AP Environmental Science classes, which are currently working on developing legislation to improve the environment. While Honda did not deliver a formal presentation, he spoke to individual students and, in the words of AP Chemistry teacher Kavita Gupta, “picked their brains.”

“It’s very important for people in policy making to see what high school kids are doing,” Gupta said. “Even if it just so [they can] give input and ideas.”

Gov Team, on the other hand, did not receive guidance from Honda as they had previously anticipated. Honda had made plans to meet with Gov Team on May 22 but was unable to do so due to preparations for President Obama’s visit to the Bay Area on May 23. Time constraints and his emphasis on the STEM field prevented him from addressing Gov Team during his visit to MVHS on May 25 as well.

During their trip to Washington, D.C., Gov Team members met with Honda to set a date on which they could present to him their solution to the American education crisis. The presentation — which covers numerous aspects of education including, similarly to Honda’s bill, the STEM field —  was one of three that Gov Team initiated this semester, each centered on a different level of the government. As their local project, Gov Team addressed City Council on how to revive Vallco Shopping Mall on April 3. Due to the circumstances, however, Gov Team will no longer have an opportunity to present their federal-level project on education to the Congressman.

“It’s a bummer,” said Gov Team Public Relations Manager senior Meg Murthy. “I understand that a politician never really keeps their promise, but it’s still a bummer … We worked hard on this presentation. But we understand that these things happen.”

Despite the fact that Gov Team will not be meeting with Honda, they are still hoping to present their ideas to Gov Team teacher Eric Otto’s now-retired government professor from Santa Clara University, Joseph Di Salvo. Murthy hopes that, if they record this presentation, it will at some point be viewed by both Honda and State Senator Joe Simitian.