Boys tennis CCS: Season comes to a close in quarterfinals 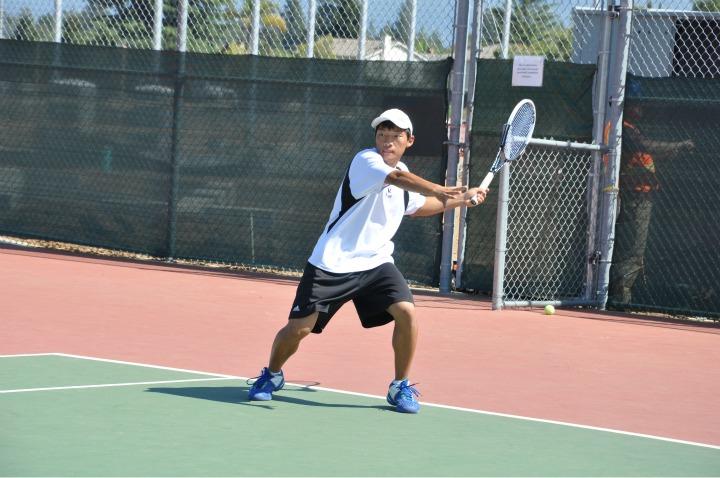 This year, the Matadors were looking to make it far into CCS; they entered the tournament seeded third and had an undefeated league record of 14-0. The team got a bye in the first round of the tournament and beat the Leland Chargers 12-5 on May 4 to qualify for the quarterfinals. However, the Matadors were unable to advance to the semifinals, losing 8-10 to the Saratoga Falcons on May 7.

Second Round: MVHS vs. LHS (12-5)
The Matadors started the tournament strong with the help of a solid singles rotation that won eight of the team’s twelve total victories. Senior Nathan Law and sophomore Edward Ang won all three of their sets, while freshman Jonathan Li added another two victories. The MVHS Boys Tennis team won their first CCS match by defeating Leland 12-5.

“Overall, I’d say we did very well,” head coach Bruce Becker said. “Our singles were outstanding — they only lost one match.”

“Our doubles started out shaky but they started playing better,” Becker said. “[They] did well, but our number one doubles could have done a lot better.”

As the match progressed, the Matador doubles picked up their performance, with all three teams winning their second sets. While Kanungo and Lim lost their final set 3-6, the victories by the singles teams ultimately sealed the victory for the Matadors, and the Chargers defaulted their last two sets before Chaluvadi, Liu or number two doubles sophomore Saxon Day and junior Leonard Ting had a chance to play their final set.

QUATERFINALS: MVHS vs SHS (8-10)
On May 7, the Matadors played against the Falcons in the CCS quarterfinals. Strong performance by Saratoga’s number one singles, sophomore Kial Kaiser —who won all three of his sets — and sub-standard playing by the MVHS doubles ultimately led to a close 8-10 defeat.

The Matadors walked into the CCS quarterfinals knowing it would be a tough match, and the round-robin format of the CCS matches only helped Saratoga.

“I expect a really tough match against Saratoga; it could go either way,” Becker said after the Matadors’ victory against Leland. “We barely beat them twice in the season, and to beat a team that good three times in a season is tough.”

From the beginning of the first set, the match turned out predictably close. Kaiser, who is ranked 4th in California and 12th in the United States for his age group, defeated Law 6-2, but both varsity two and varsity three singles, Ang and Li respectively, won their sets. By the time each of the teams had finished playing their first set, the team score was tied 3-3.

“The doubles just killed us,” Becker said. “Our number two doubles were outstanding, but our number one and three [disappointed.] Our number one doubles didn’t even beat their two and three — didn’t even come close. If we had won those two, we would have won the match. It’s that simple.”

However, victories by Law and Li in singles, as well as a victory by number two doubles sophomore Saxon Day and junior Leonard Ting, ended the second set on a tie, with both Matadors and the Falcons with six sets apiece.

Disappointing doubles performance continued into the third set, where Cheung and Tsao lost 1-6, as did Chaluvadi and Liu. As sets closed out, two sets won by each school made it clear that victory or defeat would depend on the performance of two singles players: Li and Ang.

It seemed as if the match would ultimately end 9-9, with the victory decided by which team won more games overall, as Ang would likely defeat Saratoga’s number three singles while Li would lose to Kaiser. As predicted, Li ultimately lost his final set, but he was able to win two games in the process. However, the most unexpected defeat finally came from Ang, who defied expectations by losing to his opponent 0-6, ending the season for MVHS Boys Tennis.