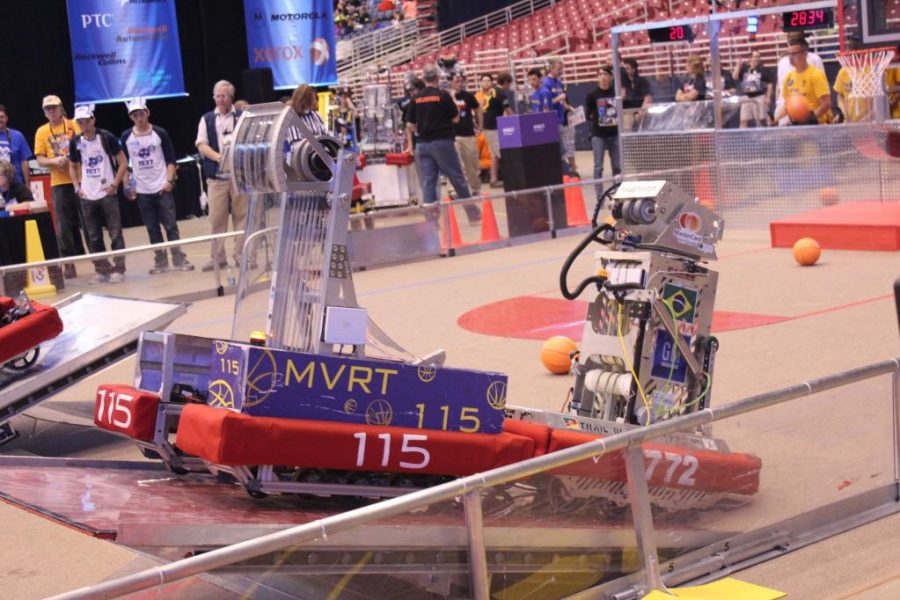 From April 25 to 28, the MV Robotics Team competed in the National Championships of the FIRST Robotics Competition in St. Louis, Missouri. Although the team did not qualify for the elimination rounds of the tournament, MVRT won four of the nine qualification matches that they competed in and topped off their performance by winning the Championship Website Award.

To compete, teams designed and built robots to play a basketball-like game called “Rebound Rumble,” in which three robots per team attempted to score 18 foam basketballs into four hoops of varying heights. At the end of each match, robots could attempt to balance on teeter-totter like bridges in the center of the court for bonus points.

To qualify for the National Championships, teams could either win a regional competition, a regional Chairman’s Award or an Engineering Inspiration Award. Unlike in previous years, MVRT did not qualify for the National Competition through any of these means, despite having attended two regional competitions — the Sacramento Regional and the Silicon Valley Regional. To reach the National Competition this year, MVRT signed up on the registered waitlist, and when a spot opened up, the team was chosen to compete in St. Louis.

However, not winning a regional competition put MVRT at a distinct disadvantage against the 400-odd teams at the National Championships.

“At the National Championships, the level of play is going to be 10 times higher than it was at regional competitions,” MVRT President senior Anant Singhania said. “The majority of teams that are competing at these competitions are now the winners of individual competitions, so it’s difficult for us.”

This year, MVRT effectively employed an offensive strategy at the regional competitions it attended, with its robot trying to shoot from as close to the hoops as possible. However, at the National Championships, the team encountered defensive-minded opponents — a tactic not usually seen at regional competitions — and was forced to revise its strategy.

“It becomes a lot more difficult to score with another robot playing defense, but our robot was never designed to shoot in the safe zone. In that sense, we actually changed our strategy completely: we ended up becoming one of the defensive ‘bots,” Singhania said. “We played what I would consider fairly strong defense, which shut down a lot of the top teams and kept them from scoring massive amounts of points.”

Ultimately, the team’s robot did not earn enough qualification points to be picked for the elimination rounds of the tournament, despite strong defensive play. However, MVRT did win the Championship Website Award. MVRT’s website, www.mvrt.com,  has been a consistent award winner over the past six years:  it was awarded the Best Website award at both of the regional competitions that MVRT attended last year and one regional competition this year, as well as the Championship Website Award in 2008.

To win the website competition, webmaster senior Sean Loveall had to build the website to a number of judging specifications. He tried to create the best possible user interface in terms of aesthetic appeal, ease of navigation and overall usefulness. He also focused on the most important aspect of the website: improving the content itself. Loveall has been the webmaster of MVRT since his sophomore year, and has spent a great deal of time refining the MV Robotics website to bring it to its current award-winning state. However, he believes that even the nation’s best Robotics website still has room for improvement.

While MVRT’s overall performance at the National Championships of the FIRST Robotics Competition may not have fulfilled all of their goals, team members were fairly satisfied with their results.

“The robot performed as we expected — it never broke down, there were no fixes that needed to be done, we were shooting properly — we basically accomplished everything that our team was expecting to accomplish,” Singhania said. “That’s kind of what we were satisfied with — we were happy with it.”