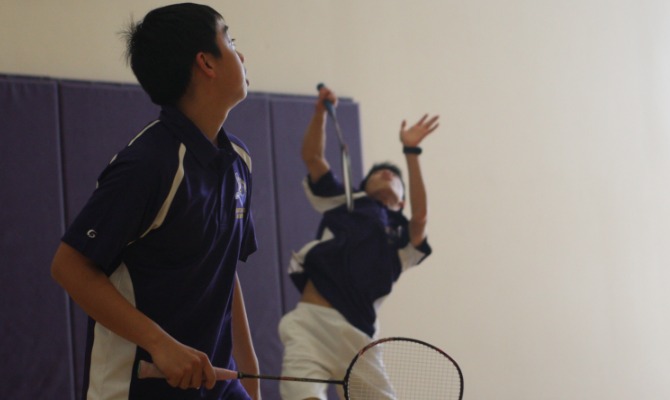 On Thursday, March 29, MVHS Badminton defeated the Gunn High School Titans with steady performances throughout the matches. While both the Titans’ and Matadors’ singles players struggled to gain an advantage, the Matadors’ doubles teams played aggressively, leading to an overall win of 22-8.

In the first game, Lee was off to a slow start, with Wang consistently hitting clears and drops that threw Lee off. As the round progressed, however, Lee found his rhythm and slowly caught up to Wang. At 8-7, Lee pulled ahead, but Wang’s quick footwork prevented Lee from initially widening his lead by more than a point. They tied once more at 10-10, but Lee quickly ended the match with a dominant five-point streak to end with a 15-10 victory.

The second game began in a similar manner, with Wang securing a significant lead over Lee after recuperating from his previous loss. Wang’s smashes went frequently unanswered in the early parts of the game. Despite this, Lee managed to stay within three points of Wang and the score remained at 3-6 for several rallies; following this, Lee increased the aggressiveness of his shots for another five-point streak, eventually gaining a two-point advantage. However, Wang was able to catch up to Lee’s lead, and the game remained close until the players tied at 12-12. From that point on, both players played fiercely even as they lost stamina, with Lee ultimately pulling through with a narrow 15-12 score, winning the match against Wang 2-0. Even so, Lee was not completely satisfied with his performance.

“I did okay, because I was sick for the past four days,” Lee said. “I guess next time I can beat him by more. [I felt] frustrated, because he got too many points [that] he shouldn’t have.”

The round began aggressively and maintained a high level of energy throughout, with tight shots and smashes from both sides frequently sending the players scrambling all around the court. Between Ma and Ke, every drop or clear from Yang and Habu resulted in a rally of smashes. Ma and Ke secured an early lead, but Yang and Habu mirrored Ma and Ke’s aggressiveness for the beginning of the round — however, Yang and Habu found it difficult to keep up. As the round progressed, Ma and Ke continued to play aggressively, causing their opponents’ coordination to suffer. Ma and Ke earned a undisputed 15-1 win.

“We played well…because me and Justin work well together, and we are able to see what we are doing wrong,” Ke said. “It was fun. I wasn’t really nervous.”

In the second round, the Matadors again got off to a quick start, but were soon tied with Gunn at 2-2 before losing the lead. Ma and Ke quickly recovered to close the point gap, however, and soon pulled ahead of Yang and Habu. The players utilized all of the court, forcing both sides to tighten their coordination. Ma and Ke eventually emerged victorious with a score of 15-7, securing a win against Gunn with a score of 2-0.