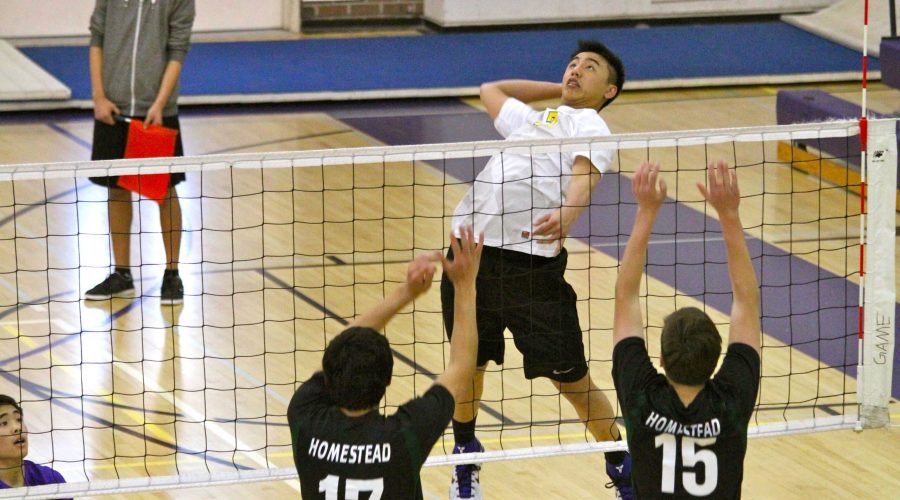 Junior Derrick Chiu jumps up in the air to spike the volleyball past the Mustang blockers. Although the Matadors lost to the Mustangs in their last game, they were able to beat them in three straight games on April 6. Photo by Patrick Xie.

Going into the game, the team knew they had to keep their eye on particular Mustang players, including outside hitter Homestead senior Chet Radish.

“We decided coming into this match [that Radish] was not going to single-handedly beat us,” coach Paul Chiu said. “He killed us hitting balls from the back row the first time we played [Homestead]. Today, and every time he took a swing, there were three blockers up there. We forced him to think about it a little bit — he was rolling, he was tipping, he was hitting balls out of bounds.”

The Matadors were able to maintain a lead for most of the match as they cruised to a straight set win. Juniors Cory Low and Derrick Chiu and sophomore Ryan Manley led the charge throughout the first game with powerful spikes that the Homestead blockers could not defend. The Mustangs were able to keep the game close for most of the match, but the spikes, timely blocks and digs kept the Matadors on top.

The first set was evenly played with the Matadors maintaining a slight lead for the first part of the game. Errors in Matadors passing and strong Mustang spikes tied the game 14-14, but from there the Matadors went on an 11-1 run to win the game 25-15. Players who contributed to the dynamic streak included Low and seniors Avery Hua and Jeffrey Zhang, who had strong blocks that shut down the Mustangs offense. The blockers, according to Paul Chiu, did a solid job in terms of recognizing where the ball was at all times and shifting over to wherever defense was needed.

“Defense was a huge part of our strategy today, and everybody did their part,” senior Edward Wang said. “We had a few struggles with Radish’s hits, but in the end, we scrambled for every ball and got them up.”

The Matadors took the momentum from that 11-1 run to quickly end the first set and win the first four points of the second set. Homestead responded by finishing spikes and blocking the Matadors’ hits to tie the game up at 14-14 once again. Long rallies followed with both teams scrambling to keep the ball up, saving it with one hand or sliding on the court in an attempt to win the point. Similar to the first game, however, the Matadors were able to keep control, taking the last five points of the game to win 25-20.

Manley gave the Matadors ten of their 25 points in the third game with powerful spikes, taking advantage of the faltering Mustangs defense. Homestead rallied back halfway through the game, tying it up at 15-15.  But, again the Matadors responded by going on a 10-2 run. Another big contributing factor to the win, according to Paul Chiu, was aggressive service, which threw the opponents out of rhythm. The game ended 25-17 with three consecutive service aces by Zhang.

“Homestead’s a good team, so I’m pretty happy that we put them away,” Manley said. “Beating them … was a great accomplishment, and it will push us forward.”

Paul Chiu said that the team had run a drill the day before the match in which they worked specifically on defending back-row hits — a big problem the last time they faced Homestead. The team got accustomed to throwing up three blockers against the back-row attacks, which paid off in the match.

“Over the course of the season, these guys are [starting to believe] they belong in the upper tier teams,” Paul Chiu said. “We’ve beaten all the second-tier teams; we’ve beaten good teams and the tournament this past weekend was big. I think they’re gaining confidence in themselves. They’re confident in terms of what they can do.”