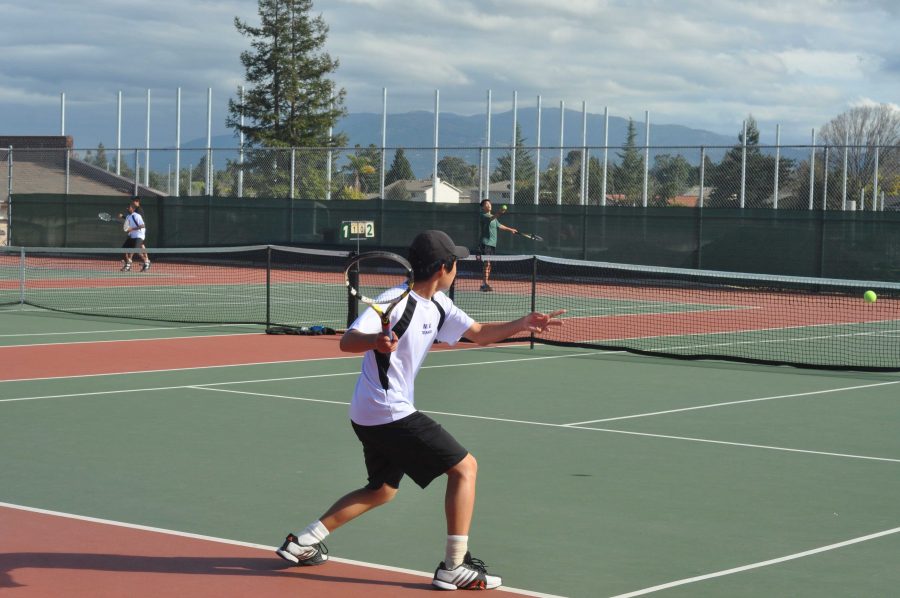 Freshman Jonathan Li readies a backhand return. Li went on to win his games 6-3, 6-1 and contributed to the team score of 6-1. Photo by Kevin Guo.

On March 22, the varsity boys tennis team continued their undefeated league streak, scoring 6-1 in a home game against Palo Alto and bringing their league record to 7-0. The team went into the game expecting to do well — this season, the Matadors defeated Los Altos 4-3 which previously beat Palo Alto 5-2 — and their performance did not disappoint.

The Matadors swept all four of their singles matches, none of which even entered the third set. Varsity one singles senior Nathan Law did particularly well, winning his match 6-0, 6-0, as did number four singles junior Jeremy Liu, going 6-2, 6-0. However, head coach Bruce Becker thought there was still room for improvement.

“Singles did as expected, but doubles could still use a lot of work,” Becker said. “We could have — should have — gone 7-0 today, but that’s OK. We did well.”

Although the Matadors pulled through in doubles matches by sophomores Saxon Day and Matt Cheung as well as juniors Leonard Ting and Jonathan Tsai, the doubles matches as a whole were much closer. The single loss of the day came from number one doubles junior Sudev Chaluvadi and sophomore Daniel Lam.

In the first set, Chaluvadi and Lam played a fairly close game, going 6-4. Lam’s volleying outpaced the Viking’s defense and led to the first victory in the Matador’s favor. At the start of the second set, their opponents began to dominate with strong serves, but Chaluvadi and Lam were able to turn around a 1-4 deficit to 4-5. However, the Matadors were tired out by the end of the second set unable to capitalize on their comeback, eventually losing 4-6.

The third game was one of the closest of the day; in the only tiebreaker of the match, weak serves and unforced errors, caused Chaluvadi and Lam to go 6-10. Chaluvadi and Lam may have lost their match, but they played well in spite of last minute shifts in the ordering of doubles players. Lam only recently started to play number one doubles, and the pair only lost the match in a third-set tiebreaker.