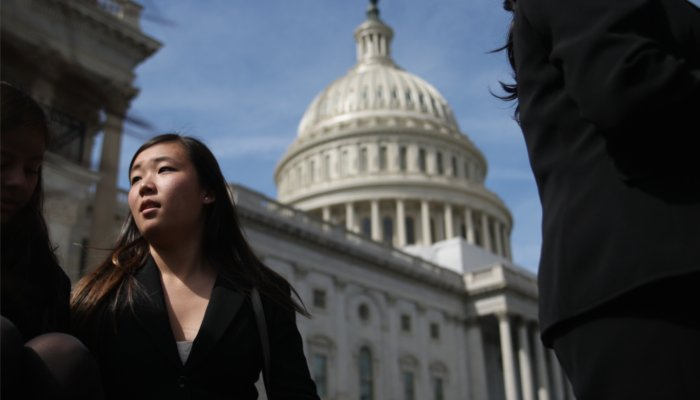 After their long days of visiting the capitol and witnessing political debates, they thought it was going to be an average dinner and dance boat cruise on the Potomac. Little did they know that Gov Team adviser Eric Otto and social sciences teacher Viviana Montoya-Hernandez would show their dance skills at center stage, to the cheers and excitement of 15 Gov Team students.

From March 3 to 8, Otto, Hernandez and the 15 students explored America’s government — from witnessing political discourse to attending lessons American history. Unlike the previous year, in which the 2011 Gov Team toured the city independently, the team coordinated with an educational program called American Civics Center to organize their transportation, tour guides and schedule. The change was brought about after discussions with administration about safety and organization on the trip.

The team watched a political debate between political analysts Ann Coulter (conservative) and Lawrence O’Donnell (liberal) at George Washington University, listened to presentations by advocates of federal gun control and regulation and conversed with representatives of a Libertarian Think Tank.

The students visited various Smithsonian museums, the Newseum, and several memorials, including the Lincoln memorial and Martin Luther King memorial. On one evening, they traveled to Baltimore, Md. to see the play “The Addams Family.” The final day in Washington D.C. was spent exploring Capitol Hill.

According to Otto, one of the largest victories for the team was a promise Congressman Mike Honda made on the steps of the Capitol building to visit MVHS in May 2012 to discuss education reform with the class. The team also had breakfast with California state senator Dianne Feinstein, met with a staffer for senator Barbara Boxer and observed the House of Representatives from a balcony as the representatives voted on an amendment to a manufacturing bill.

“[Senator] Feinstein…and the great meeting with [Congressman] Honda and seeing the session of the House of Representatives was really cool,” senior Durva Vaidya said. “I got to see first hand how things work at Capitol Hil.”

After watching the House of Representatives vote, senior Divya Sriram was quite baffled by their work ethic. Students witnessed the disorganization and chaos of the Congress — a large portion of congressmen were chatting or browsing their iPads and cell phones while a representative was presenting a speech about the bill.

“I think the most memorable experience was to see how our own congressmen act in an actual session of the House of [Representatives],” Sriram said. “It was pretty disappointing seeing [how] our government behaved.”

While the main purpose of the trip was for students to experience the American government first-hand, many of them felt that this was also an opportunity to learn more about each other.

“I never knew that people were different than they were in Gov Team, especially the teachers,” Sriram said. “It was funny to see that they have a more outgoing personality away from school.”

As there will not be a Gov Team next year, the team expressed gratitude in being able to explore their nation’s capitol in this way.

“It was amazing that we got to see almost everything there was to see in D.C. in about five, six days,” Sriram said.

Karishma Mehrotra and Kevin Tsukii are members of Gov Team who traveled to D.C. and reported for this story.