MOVIE: “The Lorax” is a fun watch, but not memorable 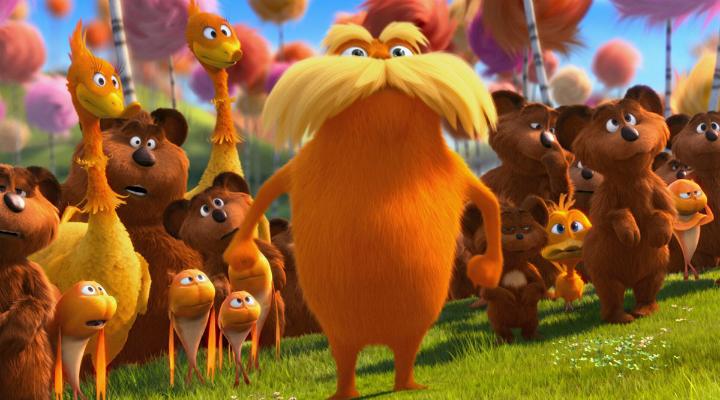 Thneedville is an artificial town full of inflatable trees and enclosed on the sides from the outside world by metal walls reminiscent of some industrial wasteland run by a money-hungry maniac who has found a way to sell air.

This is where “The Lorax” takes place. A young resident of Thneedville, Ted (Zac Efron) is a 12-year-old boy who vies for the affections of nature-loving Audrey (Taylor Swift) by finding a tree for her. With the help of his lovable and sly Grammy Norma (Betty White) Ted happens upon the Once-ler, a man who can tell Ted what happened to the once-abundant Truffula trees and help him find one for Audrey.

“The Lorax” is, in fact, multiple story lines intertwined. The movie delicately weaves together the stories of Ted, the Once-ler, the Lorax and even a glimpse of Mr. O’Hare, the man who runs O’Hare Air, the company that has monopolized selling air to residents.

As a whole, “The Lorax” is a charming children’s film, complete with cute animals, bright colors and admittedly catchy songs. As is expected with a movie based on one of Dr. Seuss‘s books, rhymes are present — but are not overwhelming.That kind of detail tones down the childish feel of “The Lorax” just enough so viewers can watch the movie and marvel at its cuteness but not be turned off by its being geared toward a younger audience.

Where the film falls short, however, is in getting across the deeper meaning of the story. As in Dr. Seuss’ The Butter Battle Book, which was about the arms race, “The Lorax” has its own moral lesson to teach — environmentalism. But the movie seems to oversimplify the matter. “The Lorax” tackles the issue of preservation and natural resources from a child’s perspective. It’s doubtful that this message is going to get through to any of the kids who take up over half the theater seats . The movie and its message are good, but does not suggest any real method of improvement. It’s simply an hour and a half of cute singing and dancing cartoon characters, and it lacks any more substance than that. But it’s still worth a watch if you’re into talking animals and pom-pom trees.