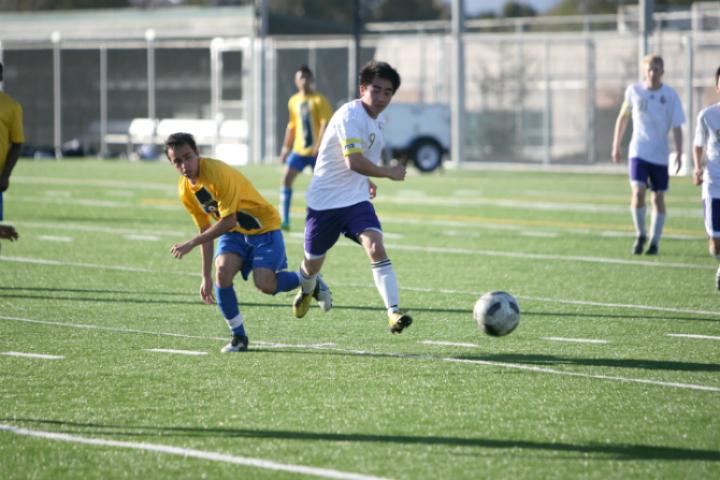 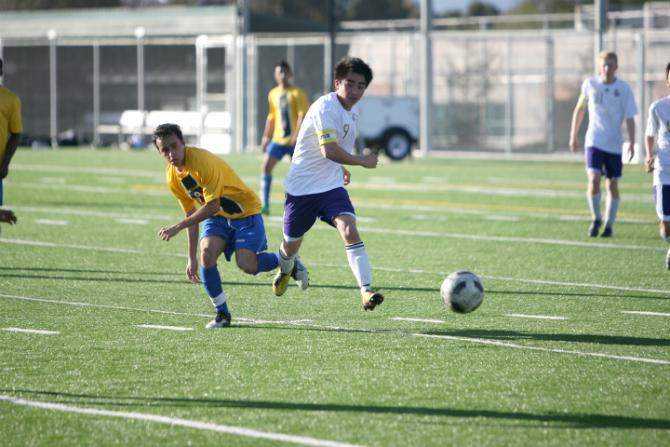 Senior and co-captain Boson Wang runs past a Santa Clara player in pursuit of the ball during the first half of the senior game. Photo by Kevin Tsukii.

The Matadors (6-3-2) had a lot on the line on their senior night game. This was the game to give it their all — not just because this was the seniors‘ last home game, but they were close behind second place Santa Clara High School (7-1-2) in the El Camino League. For the seniors and for a chance at CCS, they had to win this game.

Despite senior Dustin Polgar goal to tie the game 1-1 in the second half, but the Bruins managed to answer quickly, eventually winning 1-2. The Bruins immediately started off strong, bringing the ball up the field in position to score. They were able to keep it there and score within five minutes into the game with a header from a throw in, putting Santa Clara up 1-0. The Bruins were able to capitalize on the positioning mistakes from the Matador’s defense and goalkeeper senior Pushkal Kannan.

“It really was just mental lapses,” junior Devin Ho said. “Those two goals just should not have happened. Even our coach said that he wasn’t even watching cause he didn’t think they would be goals.”

MVHS fought back throughout the first half by applying pressure to the Bruins defense. After a few breakthroughs, the Matadors had a few chances to score but were unable to get the ball into the net.

Both teams played aggressively and after several tripping incidents made the game tense as players from both sides shouted to the referees to make more foul calls. Even as the Matadors drove the ball into scoring position, the Bruins were able to kick the ball to the other side every time.

“I need to figure out how to play teams that play kickball,” head coach Pooya Hajjarian said. “Teams like Santa Clara play kickball. The ball comes to them and they just boot it to two fast forwards who put it in.”

Despite the rocky start, the Matadors were able to gain some momentum with a free kick. Although the shot from junior Bobak Ohadi was close, the ball hit the side of the net and did not go in. They continued with a few more close shots, a few going right over the net, but still did not score.

Finally the momentum led to a goal when Polgar hit it in with an assist from junior Baris Demirlioglu, making the score 1-1. However, the celebration was short-lived as the Bruins responded quickly on a throw-in taking the lead once again 2-1.

The Matadors continued attacking and driving the ball to the other end of the field, but once again missed the chances to score. Although the game was extended a few minutes because of the ball being hit out of bounds so many times, MVHS was unable to tie the score.

“They have a strong defense and its hard to break down,” Hajjarian said. “We broke it down more than four or five times, we just couldn’t finish those chances.”

The Matadors needed to win this game in order to have a chance to enter CCS. As the second to the last game of the season, MVHS played strong until the last minute. Despite the loss, MVHS has proved to be a strong soccer team this season with a winning record.

“People are starting to respect MVHS,” said Hajjarian, “[MVHS] is being known as a powerhouse now and we really wanted to show that today and I think we did.”

The last game of the season will be on Feb. 15 at Wilcox High School.