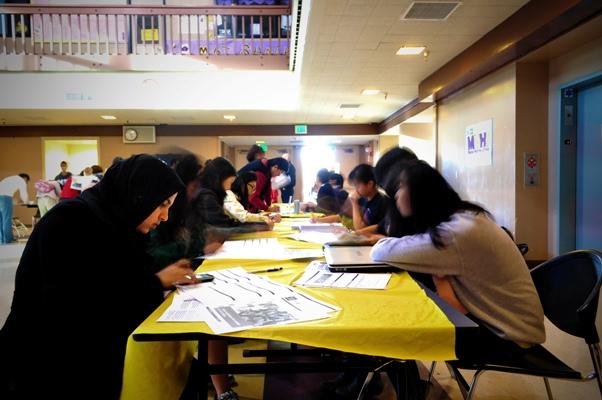 At around 5 p.m, the crowd had slowed down, but potential donors were still arriving. With estimates of over 100 people who had their cheeks swabbed, the numbers slowly rose to 200 — and more.

MVHS held a drive for Class of 2007 alumnus Jack Chin  in the gym lobby on Feb. 10 from 3 to 6 p.m. Chin was diagnosed with Acute Lymphoblastic Leukemia in the summer of 2011.

On Feb. 6, art teacher Brian Chow and science teacher Pamela Chow contacted principal April Scott to initiate a drive for Chin on campus. By the evening of Feb 6., Scott had arranged for the drive on Feb. 10 with the Asian American Donors Program. Scott was also in touch with Jack Chin’s twin brother, Jim Chin, who attended and helped run the registry. Jim Chin has been involved in hosting other registries as well to increase the number of potential donors in his efforts to find the bone marrow match for his brother.

“I’ve been trying to be as useful as possible,” Jim said. “It’s really great that so many people are involved, it really means a lot to us.”

At the Cupertino Library bone marrow registry held by AADP on Feb 4., Jim Chin came across one of his classmates, 2006 alumnus Kevin Ju, who was also a friend of Jack Chin. When Ju found out about Jack’s situation, he contributed as much as he could, creating fliers and taking pictures at various donor drives.

“I remember when [Jack] and I were in Speech and Debate together, he did this dramatic interpretation of a soldier’s story,” Ju said. “It really touched my heart, and now that he is in this condition, it just sucks.”

Cupertino community member, Neil King, had found out about the event through television announcements and therefore decided to register as a donor.

AADP has held over 10 drives per week for Jack Chin and another cancer patient who is currently in need of a matching donor as well. Although the AADP expected only 100 participants, according to the volunteers, a trashbag was almost filled with swab tests.

“This really speaks a lot about our community,” Scott said. “My heart just breaks for Jack, but it’s good to know that the community we live in is so united and willing to help out.”

Along with AADP and Jack Chin’s family, Scott requested that Octagon community service club send volunteers to the donor drive to go hand-in-hand with Octagon’s Cure Cancer Cafe — whose profits go towards leukemia and lymphoma patients.

Jack Chin is expected to make an appearance at CCC to talk about his experience if he is well enough, however if he is not, his brother will be present.

Correction made on Feb. 13 at 8:54 p.m: Jack Chin and Steffi Lau have been friends since high school. Steffi Lau has not coordinated television channels to broadcast Jack’s situation. The current version of the story reflects the correct information.