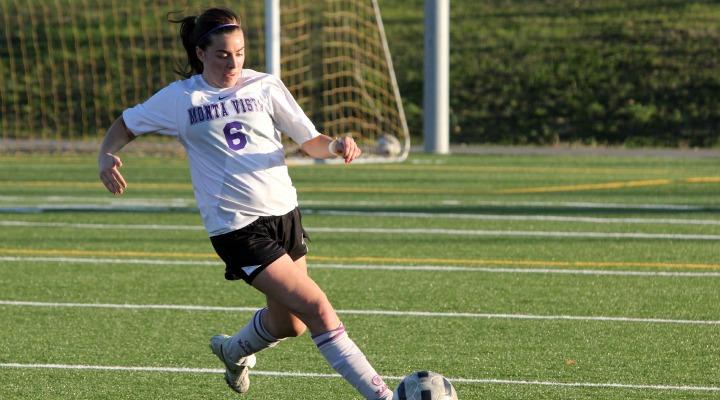 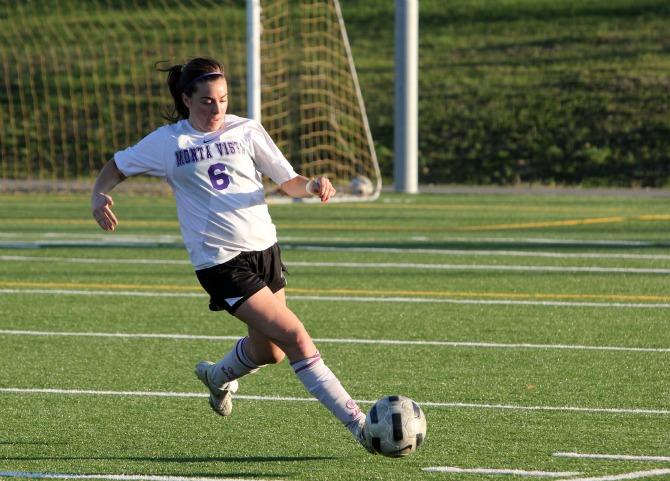 Senior Claire Nastari reaches the ball before a Mountain View High School forward, and kicks it away from the MVHS goal during a game against Mountain View on Feb. 8. During the second half of the game, the ball was mainly on the MVHS side of the field, and defenders took every chance they could to move the ball away from the goal. Photo by Yaamini Venkataraman.

With CCS playoffs drawing closer, the Matadors faced Mountain View High School, the top-ranked team in the league, on Feb. 8. Mountain View had beaten MVHS in CCS last year in the quarterfinals.

“I’d love to knock them out of first place,” assistant coach Greg Wendschlag said to the girls during halftime. “That would be sweet.”

Although the Lady Mats did not win in their second league match against Mountain View, they were able to tie 0-0 the first-place team in a fast-paced fight on Feb. 8. Strong defensive plays by the Lady Mats in the second half kept the Spartans at bay, even though the ball was mainly on MVHS’ half.

“We blocked a lot of shots and stood in front, and we didn’t let them shoot,” goalkeeper junior Gal Haroush said. “They were on our half, but they didn’t get any dangerous chances.”

Five minutes into the first half, Mountain View attempted to score a goal with a kick coming from the right side, but missed. This play characterized the game for both sides, as neither side was able to fully penetrate the other team’s defense to score a goal. Early on, the team was unable to play as a unit — the girls failed to pass the ball effectively. Mountain View‘s offense was able to anticipate the position of the ball better than the Lady Mats, winning balls easier and keeping possession. 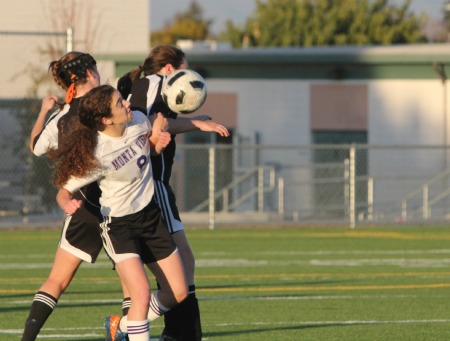 Approximately 18 minutes into the half, sophomore Kelly Ruckstuhl kicked the ball towards the top of the box, allowing junior Hadar Sachs to drive towards the goal. However, the Mountain View goalkeeper was able to cut off the pass before Sachs could get to it.

The girls felt an increase in intensity as the second half progressed due to both teams battling for possession of the ball. The beginning of this half was played near the Matadors’ goal box, and Mountain View had multiple chances with frequent corner kicks blocked by Haroush. Although the girls were able to block passes and play a strong defense, their failure to look for open players while crossing and passiveness while playing offense caused the girls to execute incomplete passes and struggle to move the ball past their own half of the field.

Sachs ran a significant breakaway 27 minutes into the half, but she ultimately could not shoot the ball into the goal, hitting the left side of the goal post instead. The frequent turn-overs and the strong interceptions of defenders kept the score at a standstill. As the Matadors were playing at the top of the box in hopes of finally scoring a goal, the game ended and the team tied 0-0.

“We still gave them some chances at the corners,” defender junior Hayley Chan said. “We need to watch those switches because sometimes we get attacked on both sides.”

This game marked the second tie in a row, as on Feb. 1, the girls played Los Gatos High School for the second time and also tied 0-0.

Since the girls were able to defend well, Kute believes that they only need to push a little harder to get those goals, and hopes that once the majority of the girls on the team are no longer under the weather, they will be able to win matches.

“We’re improving. During the beginning of the year we lost to both of them, but this round we were able to tie them,” Kute said. “We just need to be able to get that good defending, get [the ball] into one or two goals … and when we get the playoffs, then we can get it as well.”

The Lady Mats’ next home game will be on Feb. 15 at 3:30 p.m. against Saratoga High School at Homestead High School.