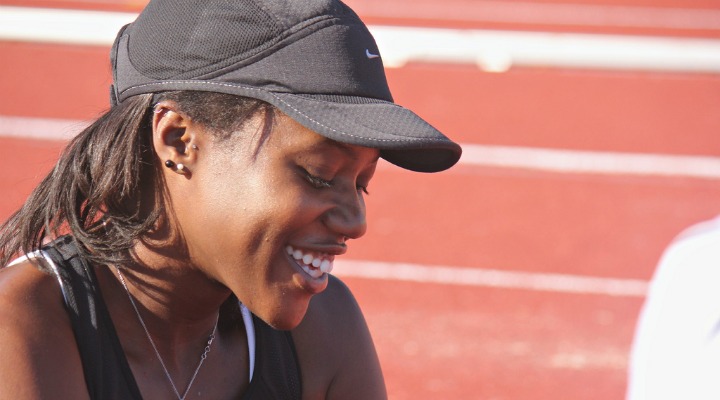 Starting spring 2012, Olympic athlete Erica McClain will be coaching the triple jump and long jump for the MVHS track and field team while simultaneously training to qualify for the 2012 Olympic team. McClain suffered a severe ankle injury last March, but is determined to overcome her injury and participate in t he London 2012 Olympics.

Starting spring 2012, Olympic athlete Erica McClain will be coaching the triple jump and long jump for the MVHS track and field team while simultaneously training to qualify for the 2012 Olympic team.

McClain graduated from Stanford University in 2008 and was a member of the 2008 USA Olympic track and field team. She has also been the USA triple jump champion and the National Collegiate Athletic Association champion, more than once.

Before becoming a triple jumper, McClain was a gymnast for eight years, and soon after became a sprinter and a high jumper. One of her jump coaches at the time saw her performing gymnastics on the Stanford field and introduced her to the triple jump event.

“I had never seen the triple jump before, so [by] watching  [the jumpers] practice, [it] reminded me of gymnastics,” McClain said.

There is a saying that every athlete will endure a major injury sometime in his or her life. On March 7, 2011 McClain’s world came crashing down, as an unexpected incident took a hold of her Olympic career — but only for a short time.

According to McClain, she was having one of her best practice sessions up until that day when she jumped and hit her foot on the edge of the sand pit, causing her ankle to flip over. It required two surgeries and a five-night stay in the Stanford Hospital.

“They told me I would never run or jump again. I was heartbroken,” McClain said. “But then I set a goal and I said, ‘No, this is my life right now, this is what I do, this is what I’m gifted at.’”

She was able to make it through her first couple days in the hospital due to support from her family, friends and teammates who gave her the motivation to stay strong. Her story inspired many people which in return, inspired McClain to overcome her adversity.

“Most people would never recover from [her injury]. For anybody [else], it would take years to get everything back,” former MVHS track and field and cross country coach and friend Kirk Flatow said. “She’s trying to do it in 15 months.”

Edrick Floreal, McClain’s Stanford coach of nine years, views her injury as just another obstacle that she needs to surpass. He also expressed his concern of her training regarding making the 2012 Olympic team.

“She’s progressed a lot as a jumper, but she needs to prepare mentally for making the Olympic team,” Floreal said.

When McClain was injured, Floreal would bring her to help coach the jumpers. By watching their exact movements, she was able to learn and benefit from them.

“I’m developing habits that not only [students] would [be able to] learn from, but I will learn from [them] too,” McClain said. “It’s a win, win situation.”

According to McClain, her ankle has inconsistent pain, but it is just something she has to deal with. McClain believes that obstacles are apart of life and her ankle injury is just another barrier that she will overcome.

Last year, Flatow read an article about McClain in the San Fransisco Chronicle by Olympic sports writer John Crumpacker. He then contacted her and brought her to campus to meet the track team in April 2011. According to McClain, she really enjoyed the students and saw them as very dedicated. Flatow then asked her to coach and she agreed.

“I have never spoken to a group of high school students who were so engaging,” McClain said.

McClain has also had numerous coaching experiences. She has her own personal training business and is a volunteer coach for the Stanford track team.

“I have had a lot of great coaches growing up,” McClain said. “So I bring what I learned from them to my philosophy and aspect of coaching.”