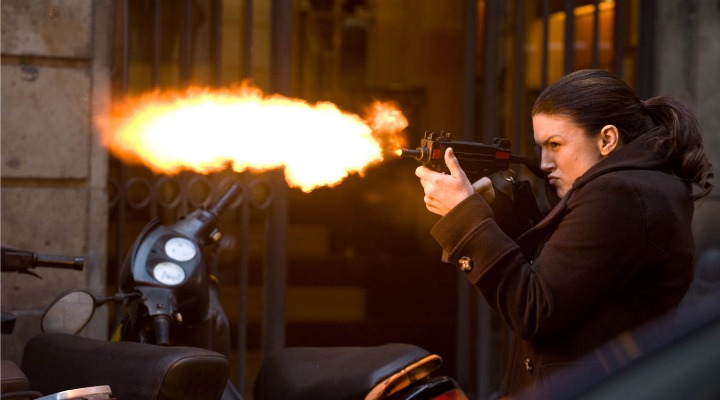 The only things that packs a fairly decent punch in Steven Soderbergh’s new 25-million dollar movie, Haywire, are the fight scenes. The rest is simply an excuse to consume unhealthy amounts of theater popcorn.

The opening scene of Haywire features Mallory Kane (Gina Carano), who works for a private company headed by Kenneth (Ewan McGregor), and ex-partner Aaron (Channing Tatum) meeting in a coffee house in upstate New York. After a brief exchange that leaves the watcher lost in the middle of a story, Aaron ungraciously throws hot coffee into Kane’s face and attempts to subdue her. Aaron is given a beating by Kane, who then proceeds to steal a car and kidnap its owner, Scott (Michael Angorano).

For some reason, Kane proceeds to reiterate her story to Scott, and these flashbacks account for the largest portion of the movie. She describes becoming a fugitive after escaping a fellow agent’s attempt to kill her, after which she bounces around the globe from Barcelona, to London, to Canada, and finally to upstate New York, where the flashbacks cease and poor Scott is all caught up. The story continues in a similar fashion until the end that came far too slowly.

In short, the movie felt long, had a rambling, overdone plot line, and by the end I had checked my watch approximately 14 times. This formulaic movie plotline lacks complexity and has been beaten into the ground by hundreds of other directors. Observe. An agent somehow affiliated with the government is stabbed in the back by someone they trust and eventually, through a series of events intended to shock and entertain the audience, realize who they should have trusted all along.

In an effort to stand out from the flood of new movies, Haywire employs relatively entertaining fight scene choreography and “artsy” production. Initially, the fight scenes with MMA-inspired choreography were the highlight, but eventually, they become predictable. During these scenes, there is silence punctuated only by grunts and enhanced sound effects of reminiscent of a butcher using a meat cleaver and tenderizer on a hunk of grisly beef. In the rest of the production, the background music attempts to mimic that of Mission Impossible’s or Pink Panther‘s soundtracks with irritating, repetitive instrumental in the background to substitute for meaningful dialogue. Furthermore, the picture quality is intentionally washed out and transitions between scenes are choppy and framed in a way that is obviously intended to be unique. Occasionally, the focus of the camera is on an object in the foreground rather then on the actors behind them. This “creativity” lends nothing to the movie-goer’s experience.

All in all, this movie is the epitome of writers running out of ideas for good movies. It is an attempt to create something new and fresh, but frankly, I want my 11 dollars back.