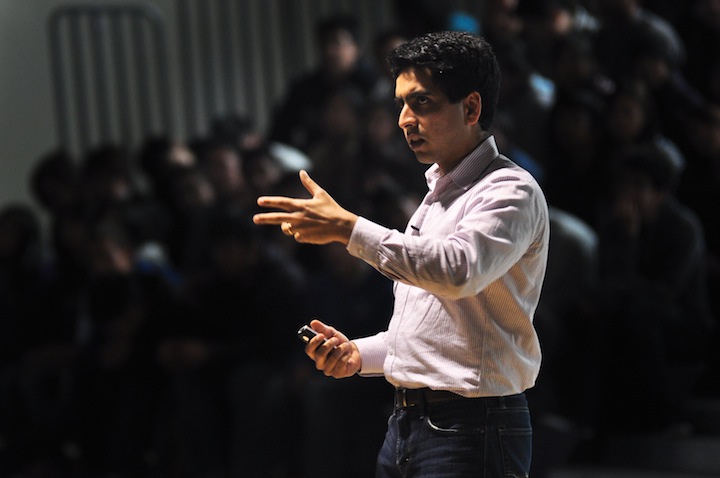 Khan Academy founder Salman Khan speaks at a school assembly on Jan. 6 about the process of creating the videos for the website, as well as his struggles and eventual success in doing so. Later that day, Khan spoke with teachers and administration regarding the current education system. Photo by Elvin Wong.

Aafreen Mahmood
“Just curious, how many of you have visited the site?” he asked. Over 700 of the people in the gym raised their hands. On Jan. 6, founder of the widely-used online educational organization Khan Academy, Salman, or “Sal,” Khan spoke to a crowd of students, alumni, eight Lynbrook High School teachers and two FUHSD district office representatives during the Back in Action Week assembly.

Khan gave two 40-minute talks to students about how he began his non-profit corporation, the struggles he faced, as well as progress that he experienced in pursuing its success. According to Khan, the website currently hosts over 2,700 videos, which cover different academic disciplines, ranging from finance to mathematics to history. His organization is currently strongly supported by donations from Ann and John Doerr, the Bill and Melinda Gates Foundation, Google, and other viewers.

The assembly was planned and executed primarily by Dean of Students Michael Hicks and the Student Life commission. Lead commissioner senior Ben Yang, who first contacted Khan in early August 2011, saw Khan to be a different kind of speaker from the past motivational speakers.

“We wanted to approach it from a different kind of view this year. Every year we have a motivational speaker and students just kind of listen to him and then forget what he says,” Yang said. “If we got somebody big that people would know, it would make more of an impact. We were hoping students would connect more with his message about education because [MVHS] is such a high achieving school and doesn’t need motivational messages.”

For some students, Khan’s talk appeared to be more of an explanation of his company; however, for others, the message was implied.

“In some ways, I would agree [with students who did not see the message] because he didn’t really advise the students, but I think as a whole, what the message of his speech and his life was to do something because you know it’s the right thing to do,” sophomore Swetha Bharadwaj said. “When he compared to his life as a hedge fund analyst to when he was starting the [Khan Academy] program, he was really happy with what he was doing even though he wasn’t making as much of a profit.”

Following the assembly, open forums for teachers and administration were led by Hicks during lunch and seventh period. During the discussions, the teachers deliberated over the future of education at MVHS, ways in which they could potentially utilize Khan’s videos in class, the progress of his work and other educational issues. Khan also shared his views about the current education system around the world and his approach to a pilot program at Los Altos Middle School.

“If you visit those classes, there will be sixth graders doing second grade math, and there are sixth graders doing pre-calculus. And they’re sitting in the same classroom,” Khan said. “It makes sense, but it’s crazy at the same time.There are no ‘grade levels’ for students at Khan Academy; they just learn.”

Throughout his talks and discussions, Khan emphasized the importance of learning and accommodating for learning styles and paces for different students. By doing so, he achieved one of Student Life commission’s goals of having him speak to the student body: to expose MVHS to a different style of education.

“I think people appreciated his talk more than previous years, because [Khan] doesn’t do speaking for a living. He does something else and he doesn’t come to deliver a message,” Yang said. “His goal is more to show his kind of education and I think students connect to that more.”

A correction was made on Jan. 7.