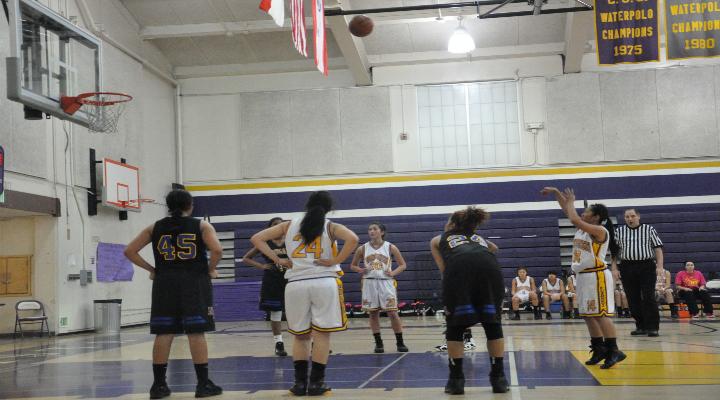 Rachel Lu
Coming off a strong win against Yerba Buena, the Matadors went up against the Newark Memorial High School Cougars in round two of the Monta Vista Invitational Tournament. The Cougars had beaten the Matadors just a few days earlier, but came back to beat them again 27-38 on Dec. 9.

The stellar defense and strong drives to the net gave the Matadors an early lead of 12-7 by the end of the first period. Their lead shrank to 16-3 by the second period, and continued to diminish from there. The defense began to falter and height started to play a big role, as the Cougars were able to get rebound after rebound to ensure some key points.

“We definitely started off really [well] with our defense,” junior Varchita Alishetti said. “We were pretty strong in the first half, but in the second half we started losing our confidence and falling back on points.”

The Matadors were able to capitalize from shots in the key to keep the lead at five. Senior Steffanie Sum led her team by adding three more points in the beginning of the second period. By the end of the first half, the Matadors were leading 16-13.

After the first half, the Cougars scored 12 points in the third period to take over the game. An early three by the Cougars sophomore Neisha Brown tied up the game, but the Matadors were able to take back the lead with two free throws. Brown came right back with another three and from there, the Cougars aggressive offense added on to the lead. A breakaway opportunity and more free throws allowed the Cougars to make the score 21-25 by the end of the third period.

The Matadors started pressuring full court in the fourth period, but with that, their defense began to falter as the Cougars were able to get through and take open shots from the key. The Cougars were able to capitalize on the full court pressure by scoring six points in a row in the span of three minutes to start the period. Unfortunately, the Matadors were unable to regain their early lead and fell 27-38.

The Matadors next game will be against Prospect in the Monta Vista Invitational Tournament for the final round on Dec. 10.