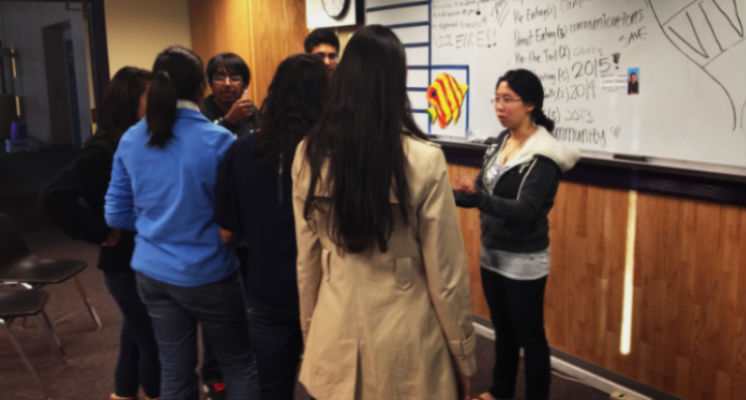 On Dec. 4, senior Michelle Jiang placed among the top eight Lincoln-Douglas debaters at the Alta Black and Silver Invitational Tournament in Salt Lake City and became the first MVHS student to qualify for the Tournament of Champions in five years.

The Tournament of Champions, which will be held at the University of Kentucky towards the end of April 2012, is a national debate tournament. It is the highest level competition for circuit debate, which is a difficult and highly technical form of debate where competitors use debate jargon and speak over 350 words a minute. An average of 80 of the nation’s top high school debaters attend the Tournament of Champions every year.

“It’s a tournament I’ve been dreaming of … since I heard about it freshman year,” Jiang said.  “Because it’s glorious, right? It’s the pinnacle of doing well in debate.”

One of the reasons competing in the Tournament of Champions has such a reputation is that qualifying is extremely difficult.

“The policy is only people with two or more ‘bids’ can go… [to qualify] is almost legendary. It is incredible,” Lincoln-Douglas novice captain junior Sean Lee said.

“Bids” are status symbols that debaters obtain by competing past a certain elimination round at designated circuit tournaments held throughout the nation. For example, at a tournament that has been designated an “Quarterfinals” tournament, competitors receive a bid if they break into the quarterfinals.

Jiang and other debate members have traveled to places like Utah, Florida, Tennessee, Texas and New York just to have the chance to compete in these tournaments and potentially earn bids. Jiang won the two ‘bids’ required to qualify to the Tournament of Champions at the Valley debate tournament in Iowa from Sept. 23rd to Sept. 26th and at the Alta Invitational tournament on December 4th.

“I was in shock actually,” Jiang said. “I don’t know [how I felt when I qualified], because when I’m kind of in my “debate mode.” I don’t really think about the results. I think about doing the best I can and getting the arguments out there that I need to get out there, and showing the judge I’m winning the round in the way that I need to show the judge I’m winning the round. So when I qualified, I was like ‘oh, I won the round’ and it didn’t really click that I actually qualified until much later.”

Jiang has been on the MVHS Lincoln-Douglas debate team for her entire high school career,  and is currently a co-captain of the varsity team. To reach the competitive level of national debaters, she has had to invest not only effort and time, but also a substantial amount of money on travel, accommodations, tournament fees and more.

“I think it is her dedication that puts her apart,” Lee said. “She spends an incredible amount of time and money — I would say [she has put] over $20,000 into this activity — and however many countless hours of practice … I think she’s the only one in the last five years that has put in this amount of work and has this amount of dedication.”

Jiang estimates that she spends an average of 15 to 20 hours on debate every week, excluding the time she spends at bi-monthly tournaments, which generally last around 12 hours. For practice, she works with the MVHS Lincoln-Douglas debate team writing cases, preparing strategies and running drills. However, Jiang also works with debaters from other schools in the Bay Area, and travels to Mountain View High School every Wednesday to practice with their debate team. She even exchanges evidence and runs practice debates on Skype with her debate friends in southern California and Florida. However, the bulk of her time is spent practicing individually. According to Speech and Debate advisor Shirley Keller, students who compete at the circuit level do so independently, and their efforts are not funded or corroborated by MV Speech and Debate.

Despite the tough competition Jiang will be facing at the Tournament of Champions next May, she is not particularly worried.

“I don’t feel like I need to do anything special, other than just continuing to work really hard in debate,” Jiang said. “If I do well, I’ll be so happy. If I don’t do well, I got to the Tournament of Champions. That was my dream, I attended, [and] that’s what’s important. So no pressure really, I just want to do the best I can do.”