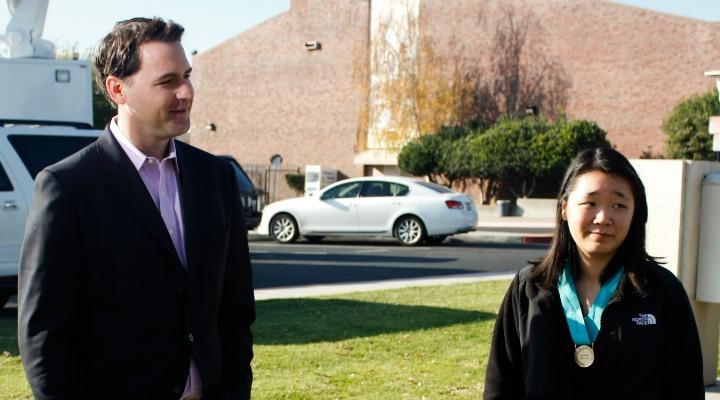 On Dec. 5, senior Angela Zhang received the top individual honors prize of a $100,000 scholarship at the annual National Siemens Math, Science and Technology Competition in Washington D.C.. Zhang has won, among other science fair honors, the Intel International Science and Engineering Fair 2010 Grand Award and the ISEF 2011 Grand Award as well.

“[Winning is] a really surreal experience,” Zhang said. “It’s something you dream about every day, and when it actually happens it still feels like a dream.”

Zhang designed a nanosystem for cancer stem cell treatment which utilizes a gold and iron-oxide based nanoparticle targeted at eradicating only tumor cells. The nanoparticle’s controlled release of the drug salinomycin at the tumor site kills the cancer cells without harming the healthy surrounding tissue. At the same time, the particle is able to monitor the treatment response. Zhang likens the multifunctional system to a Swiss army knife.

Inspiration for her project came from leading articles and journals, lab and journal club meetings.

“Science research is standing on the shoulders of other great people and innovators,” Zhang said. “They did this great research, the basics of an idea that I could use.”

Zhang made sacrifices to work on her project, from cutting out TV time to spending less time with her friends. Time management was also imperative throughout the process — she blocked out deadlines and goals for each facet of the project she had to accomplish. Zhang began the project in freshman year and spent approximately 1,000 hours researching and designing at Stanford University under professor Dr. Zhen Cheng. She experimented on mice, and found that the nanoparticle reduced the size of tumors in the animals. After completing clinical trials and other steps, Zhang’s product may be available in the medical industry in the next 15 to 20 years.

Through the process, AP Chemistry teacher Kavita Gupta, who taught Zhang her junior year, kept Zhang motivated in pursuing science, read her thesis and helped her prepare for an oral presentation for a competition the previous year.

However, Gupta notes this project was more Zhang’s own initiative.

“I would wish kids would follow their hearts and their passion[s], and just do what they believe in rather than following someone else because that is how it should be done or that is what will give [them] big bucks,” Gupta said. “Just be yourself, and I think that is what is so special about Angela — that she took a path. It was a road very less traveled. Nobody went the way Angela went.”

In Washington D.C., Zhang found that her most rewarding experience was simply meeting the other contestants and leaders of the Siemens Foundation. She views it less as a competition but rather as an opportunity to meet other students with the same passion for research.

“I definitely want to go into research; it allows me to constantly learn and never stop learning,” Zhang said.