What should you wear tomorrow? 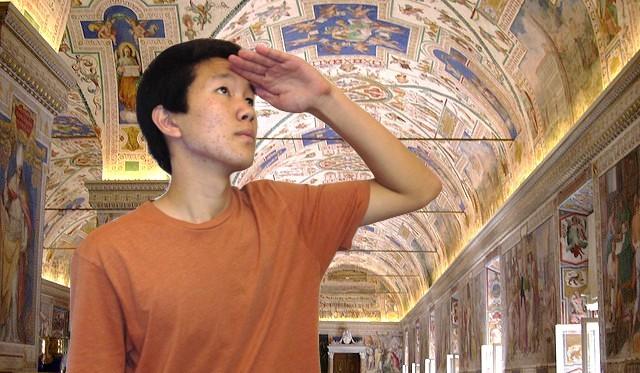 What should I wear today? People all over America are plagued with the quandary of the “right” kind of clothing. From the moment they wake up in the morning, many teenagers busy their minds with thoughts of what to wear, hoping to “fit in” with their friends. This obsession with clothes permeates all aspects of students’ lives. Designers come out with new styles 40 times more often than I buy clothes, which admittedly, is once a decade. Fashion magazines are everywhere, and even occupy useless shelf space in the MVHS library. With all the pressure to conform to an ideal of clothing, it’s easy to get lost in the confusion. There must be an easier way to decide what to wear.

The Solution
A short while ago, I was much like you — a total chump. I did what most people do when they decide what to wear in the morning: I would conduct a cost-benefit analysis, weighing in comfort, mobility, weather and the European financial situation. It was during one of these analyses that a bright idea hit me: like all other problems in life, God must have the final answer!

It was so logical. God loves everybody; therefore, he must love me. And if God truly loved me, then he wouldn’t want me to be shunned by the community. If I prayed to him and asked him what clothes I should wear, surely there would be some sort of sign.

However, there were other problems. With God getting inane requests from billions of people at a time, I could never be sure that he was listening to my requests. To fix this, I decided to cover as many bases as possible and try out all the mainstream religions. One of my prayer methods would surely be heard.

I woke up at 2 a.m. and flew over to the Vatican. I tried to pray, but I didn’t know the Lord’s prayer, so I just played along. One good thing about Catholicism: free alcohol during Communion.

I didn’t know what divine being would answer my call for Buddhism, since the religion doesn’t have an all-powerful figure, so I just decided to pray to the next best thing: me.

I flew to Mecca. When I arrived, however, I realized that the Muslim prayer schedule is a lot less flexible than the Christian one. I was too impatient to wait for prayer time, so I just left. Oh well: I realized that if I chose Islam, modesty rules would prevent me from wearing my favorite short-shorts.

I read through the 613 Jewish Commandments, but none of them were specific enough to tell me what to wear. Do not wear women’s clothing? Do not wear clothing woven with both wool and linen? What else can I wear?

This religion was one I just couldn’t miss: with so many divine beings, following Hinduism would increase my odds of being spiritually noticed more than all the other religions combined. However, since Hindu worship consists mainly of repeated mantras, it was a little difficult to sneak in my request for a clothing revelation. “Oh God the Protector… what should I wear tomorrow…the basis for all life…”

Wait … they believe what?

Time for a sign
With enough religions covered, I just knew at least one Divine being would soon send a sign. Luckily, it came just as I was getting dressed for school.

I took the Holy advice, and ever since, I have never worried about what to wear.

So now you know; you will never have to make a difficult choice between two pieces of clothing ever again. No more will you feel conflicted about fashion, dress, or even personal appearance. Because God has the answer.