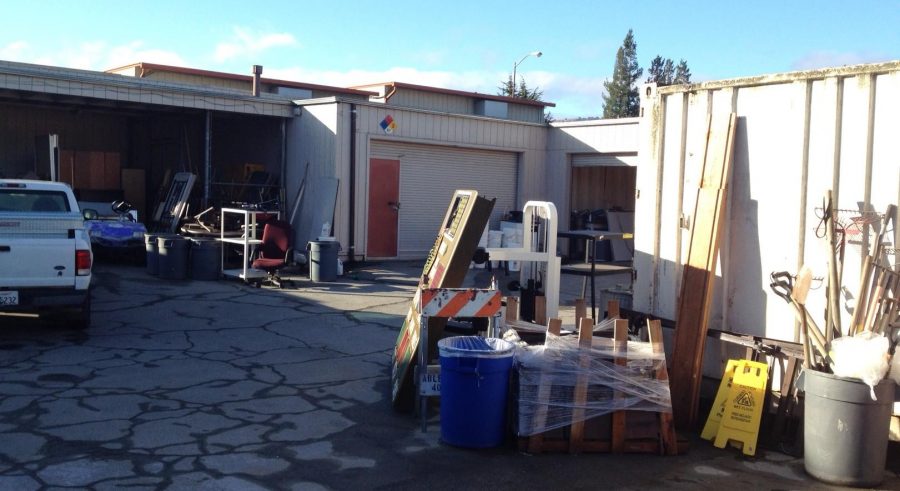 The chain-link fence enclosing the custodial containment area behind the F building was cut on Nov. 12. The Robotics team’s Argon gas cylinder was stolen, and it is suspected that the same thieves have stolen other items from MVHS in the past. Photo by Kevin Guo.

On Nov. 12, a pair of thieves stole a metal cylinder from the custodial containment area behind the F building. The thieves, who remain unidentified, cut a chain link fence on Saturday evening to remove the Argon gas cylinder.

Woodshop, Electronics and Drafting teacher Ted Shinta had purchased the cylinder for the Robotics club. Shinta was at school in the Woodshop room on Saturday afternoon when he heard a noise.

“I heard a banging noise out [behind the F building], where the custodians keep their stuff,” Shinta said. “So I went outside my room, and I saw these two guys. Well, I recognized them from last year as guys who were suspected of stealing stuff.”

When the two men saw Shinta, they walked away. However, it is suspected that they returned after 6:00, when Shinta left the campus, to take the cylinder. Shinta reported the sighting and was later informed by pool and fields keeper Tony Sousa that the chain-link fence to the custodians’ containment area had been cut and the cylinder had been stolen.

According to Campus Supervisor Ruben Delgado, Shinta’s descriptions of the thieves matched the descriptions of off-campus thieves who have previously stolen flowers, pool equipment and grounds-keeping equipment from the school.

“We’ve caught them on camera a couple times,” Delgado said.

Delgado contacted the police about the theft and Shinta described what he saw to them, but because of the lack of conclusive evidence or identification, very little action can be taken.

“The sheriff said that unless we could identify the property in their possession, it’s pretty much impossible to do anything about it,” Shinta said. “So we have to catch them red-handed and that’s the hard thing.”